Parkz caught up with Clark Kirby, CEO of Village Roadshow Theme Parks, to discuss the big changes that have been unveiled this week and how these form part of a new vision for their Gold Coast theme parks. 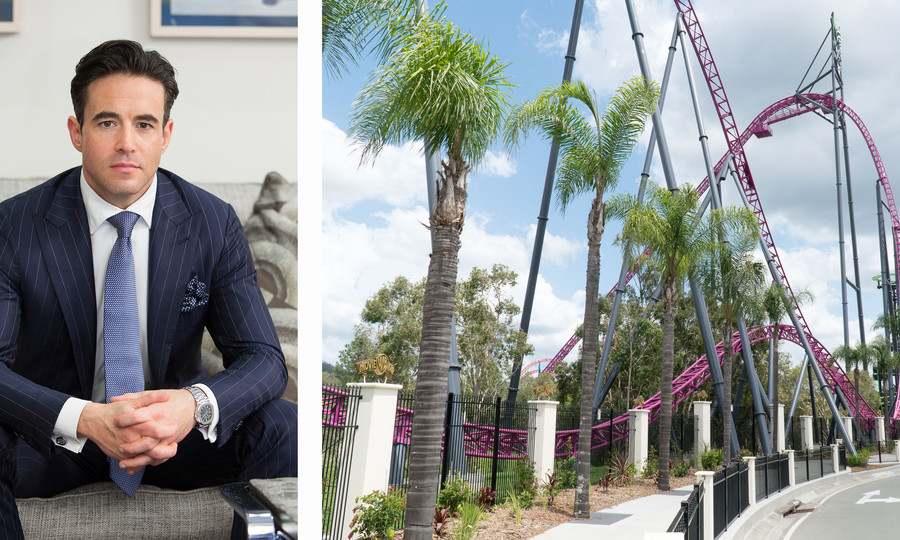 Clark Kirby has been chief executive of Village Roadshow Theme Parks (VRTP) since April, and with the changes revealed this week, it's clear that his own vision for the theme parks is forming.

This vision seems decidedly more long-term than in the past and it makes sense. Village Roadshow is the family business, founded by Clark's grandfather Roc Kirby in 1954. The company has wholly owned their Gold Coast theme parks since 2006 (Sea World Property Trust and Warner Bros. were earlier partners) and VRTP has grown to become one of their most important and stable divisions.

It becomes apparent early in my conversation with Clark Kirby that there is real enthusiasm and an emphasis on quality, guest satisfaction and delivering an overall premium experience. It's a significant pivot from a decade or so where heavy discounting and cost-cutting became the norm.

"We had gone down the path of just trying to put some tickets out in the market for a very short-term financial response," said Kirby.

To that end, last week VRTP unveiled a complete overhaul of annual pass pricing. Their new flagship pass, the Village One Pass is $199 ($139 for local residents – a 30 per cent discount).

"[In the past five years] we've invested $200 million into the parks. The whole part about evolving our business is being able to continue to invest heavily in our parks."

"We don't want to be in a situation where we're just managing what we've got and trying to squeeze as much money out of it. We want to evolve what we've got there. Evolving the experience and bringing really impactful things. [...] Something that's going to really move the dial and get people excited."

"We did see that great spike in energy and excitement around the park."

Rivals is of course a major piece of the puzzle and gave Warner Bros. Movie World a truly world-class ride for years to come, but with this marquee attraction comes a renewed focus on the little things that add up to the full picture. Rides like Rivals might bring guests in and justify the premium pricing, but it's the small things that will ensure customers leave satisfied.

"We've implemented a number of quick wins which are just some of those annoying things that make no sense."

The 'quick wins' are moves like scrapping of the unpopular locker hire fees on Superman Escape. And it's a very conscious new direction for VRTP that relies heavily on feedback.

Within the organisation they've dubbed it Project Voice. Things got underway about three months ago and the pieces are falling into place now as the company heads into the busy summer period.

"Project Voice is all about reflecting on what we're doing right, what we're doing wrong and where can we improve and really focus on the customer experience. And really that's at the heart of everything we do."

Criticism and feedback that was once dismissed is now taken onboard – including that from their biggest fans.

"We've got an incredibly passionate consumer base out there. They're quite willing to let us know what they like and don't like about our parks. And I don't think we've listened to them always. I think we've been 'We've got all the right ideas,' and sometimes to our detriment."

Hearing what employees have to say also a key piece of the puzzle. When these changes were announced to staff a few weeks back, the news of Superman Escape's free lockers was met by applause.

"We've got our incredible workforce team that are living and breathing the parks. Interacting with our customers; they know where the pain points and the opportunities are to improve the experience better than anyone. [...] They're the ones dealing with customer complaints and frustrations on a daily basis."

And along with listening to their team members, Village Road are also making a considerable investment in staff to improve the quality of the guest experience.

"We had this ridiculous situation where we didn't have food and beverage or retail outlets open when the park was open – at either end of the day."

If you've been to any of the theme parks in recent years, then you will have no doubt passed outlet after outlet that's not yet open in the morning, or seen a steady stream of disappointed faces pressed up to the windows and pushing on locked doors at Dirty Harry's Bar or Dockside Tavern in the late-afternoon, in search of a drink.

"As soon as a guest comes into our park, everything is open, we're ready to have fun. Everything is ready to give them the experience that they want."

There is the addition of a concierge that helps guests as soon as they enter the park.

"They are interacting with our guests, asking them what they want to do today and directing them, giving them some pointers."

The company has also committed to introducing more roaming characters and more ride attendants. It's abundantly clear that everything VRTP are doing is about improving the quality of product they offer so that they can make their parks a premium experience and in turn move away from heavy discounting.

"We have dramatically limited our "fast pass" options because we found that this was another point of frustration for our guests."

The Fast Track passes have seen their prices significantly increased in an attempt to curb sales so that all guests – whether they purchase one or not – are less impacted by them.

Perhaps one of the few remaining gripes many guests have at Movie World is the unthemed state Scooby-Doo Spooky Coaster: Next Generation has been in for the past year.

"Scooby is a fabulous and much loved family ride and it breaks our hearts to have it in this state."

Scooby-Doo Spooky Coaster will be back with what Kirby characterises as a whole new ride experience, though still Scooby-Doo based. Details are limited while the plans are being finalised but audio-visual components are set to build on more traditional, physical theming.

"We've been exploring all these incredible technology opportunities. [...] We're utilising projection mapping and some really cool technology to give it a fresh lease of life. Rather than just rebuild what was there."

As for when it'll happen, both the technical requirements and constraints of working with overseas license-holders makes for a slow process of developing and approving the concept and then executing it.

"It won't be this calendar year, but hopefully this financial year."

As for Sea World, they're acutely aware of some of the park's shortcomings with the closure of a number of rides in recent years. Kirby acknowledges that they're focusing on smaller pieces of the puzzle there: this year's launch of a new seal show, The Reef at Castaway Bay, a new show venue in the park's Nickelodeon area and next year's Sea Jellies Illuminated exhibit.

"We're not just going to run these parks into the ground. We want to regenerate them. [...] We hate the maintenance work we're doing in the park at the moment at Sea World. We want everything to be open but obviously everything takes time."

Beyond this year's focus on smaller attractions focused at young children, there's of course the long-awaited replacement for Viking's Revenge Flume Ride.

"We are planning something big and damn impressive for where the old log ride was."

It has been an incredibly tough year for all of the Gold Coast's theme parks, but if there's any positive to come of it, it's that VRTP have been able to truly reflect on where they are, and where they want to be.

"We're just really excited about the future of theme parks in Australia and here on the Gold Coast. We should be incredibly proud because here on the Gold Coast for what we've got – in particular in our parks – there's nothing like it in Australia, there's nothing like it in south-east Asia. There are very few places like it anywhere in the entire world that can compare to what we've got."

There's passion in the entire VRTPs executive team; Bikash Randhawa, Executive General Manager who was recently appointed head of sales and marketing in addition to the Sea World Resort, is unwavering in his belief in the product they are offering, and that actions speak louder than words.

"We've got 95 rides and attractions, animal attractions, farm experiences... so collectively what we offer is the biggest theme park experience for locals, interstate and international visitors. [...] We're putting the money where the mouth is; it's not all talk. We've done it all and then we're talking about it which I think gives so much credibility to us, our team, our suppliers, the city, and tourism," said Randhawa.

As our conversation draws to a close, Kirby sums up their enthusiasm: "You can't tell in our voices but we're pretty pumped about it. A couple of passionate people here."

But that's one thing I'd disagree with Clark about. You definitely can hear this passion when they speak.