Sea World’s Polar bear Cub Mishka has celebrated her first birthday in spectacular style by enjoying a party fit for a Polar bear. 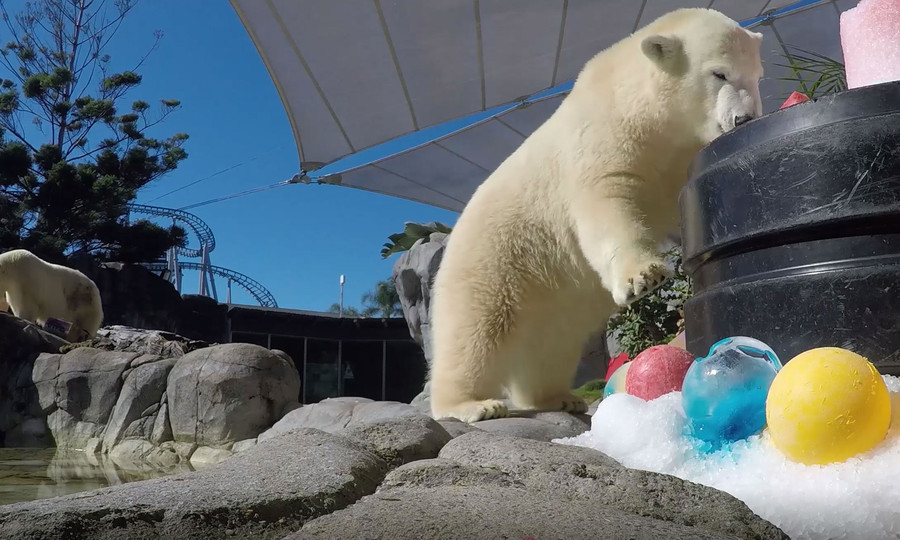 The world-class Polar Bear Shores exhibit was transformed into a celebratory environment with a host of presents, toys, treats and a special fishy birthday cake.

Mishka has done exceptionally well at Sea World under the watchful eye of mum, Liya and has come a long way since her birth now weighing in at around 110 kilograms and measuring more than one and a half metres tall when standing.

“Mishka has become a favourite of Sea World guests and this is a great occasion for us to throw her a wonderful party where she can celebrate with her favourite toys and treats,” she said.

“The exhibit here at Sea World offers one of the world’s best enrichment programs and occasions such as these provide a great opportunity for our Bears to experience a range of different smells and textures.

“Liya and Mishka’s daily food intake is about 20kgs and consists of red meats, fish and small amounts of fruit and vegetables.

“Mishka has recently moved into the Polar Bear Shores exhibit and loves spending her time exploring the new environment with Liya. She really enjoys diving and playing with toys in the pool which is great for Sea World guests who can get an up-close view through the underwater viewing area.”

Polar Bear Shores features an array of amazing enrichment  options including a cascading waterfall, a large main pool that is up to four metres deep, an array of climbing outcrops, fallen trees, shrubs and other structures providing a wonderful home for the inquisitive Mishka.

The Polar bears at Sea World are ambassadors for their species and play a vital role in raising awareness of the effects of global warming. Current research indicates that Polar bear numbers in the wild are declining, with 20,000 – 25,000 bears remaining worldwide.