MyFun, the ticketing portal and online presence for Warner Village Theme Parks, have reported the iconic Corkscrew Rollercoaster will no longer be entertaining riders as it has for the past 27 years. In its place will be the exact same ride, with a colour change and a new train – arguably the most exciting new attraction to hit the Gold Coast this summer! 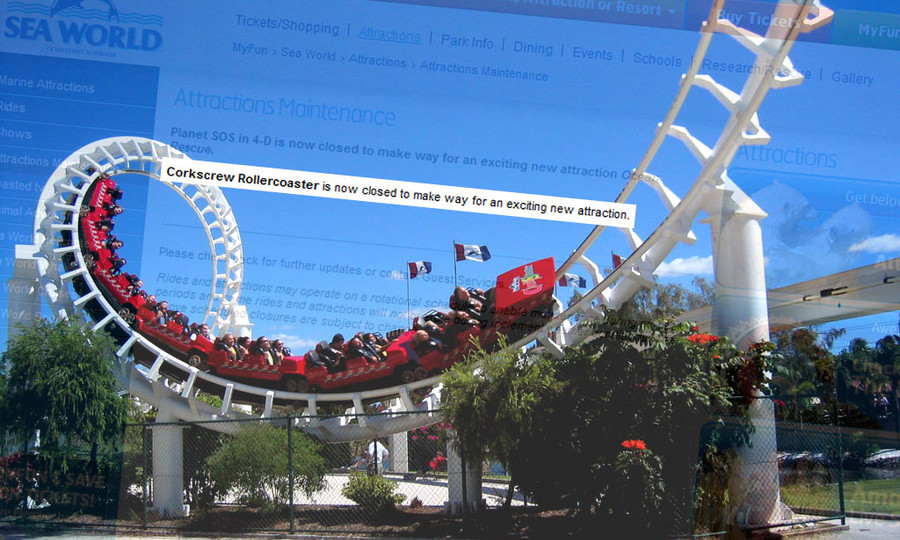 Sea World's Corkscrew Rollercoaster was a favourite at the park for some 27 years. Introduced at a time when the competition was fierce between Sea World and its rival Dreamworld. Dreamworld had the double-looping Thunderbolt, while Sea World had the smaller, smoother and more comfortable triple-inversion Corkscrew.

Along with the image of flipping dolphins, there's perhaps no image more symbolic of Sea World than that of Corkscrew's white track twisting beneath the Sea World Monorail, another of the park's hallmark attractions.

Corkscrew's fate was sealed when its white track was seen repainted in a bold orange scheme. As details unfolded, it was revealed that Corkscrew Rollercoaster's days were numbered.

Guests to Sea World however will not disappointed for long. Coming soon is Sea World's replacement for the iconic roller coaster, Sea Viper.

Sea Viper will utilise the exact same ride structure as Corkscrew but provide a completely new ride experience thanks to a new ride vehicle from little-known ride manufacturer KumbaK, an offshoot company of Dutch coaster manufacturer Vekoma that is now home to many of the brains behind Vekoma's greatest accomplishments.

The ride's new trains, featuring an open carriage that loosely resembles Sea Viper's namesake, a grotesque deepsea creature with a fearsome looking jaw. It's not too much of a stretch of the imagination to visual Sea Viper's modern restraint system as these dagger teeth.

Sea World wasn't the first to make the bold move. Holiday World, an award winning US park announced that its decorated wooden roller coaster The Voyage would be receiving new trains to make the coaster feel "even faster and smoother". No new attraction here though; Holiday World simply left the announcement at that.

Disneyland also recently completely rebuilt its iconic Space Mountain roller coaster from the ground up. But despite being a completely new experience in every sense, the ride simply reappeared as Space Mountain once again after its extended closure with minimal fanfare outside of enthusiast groups.

Corkscrew's reincarnation as Sea Viper won't see any changes to the rider position or fundamental ride experience. Instead the experience will change through an obvious reimagining of the ride's presence within the park.

The coaster's train was obviously in need of replacing, and Sea World are clearly not one to disappoint, using this as an opportunity for an all-new attraction to bring the 27 year old beast up to date with a modern look to go with what's sure to be the hit of the Coast this summer.