As roller coaster parts arrive via shipping container from Germany, Dreamworld executives reveal a precarious financial position that's more than just concerning in the face of a global pandemic: the numbers simply don't stack up on their costly recovery gamble. 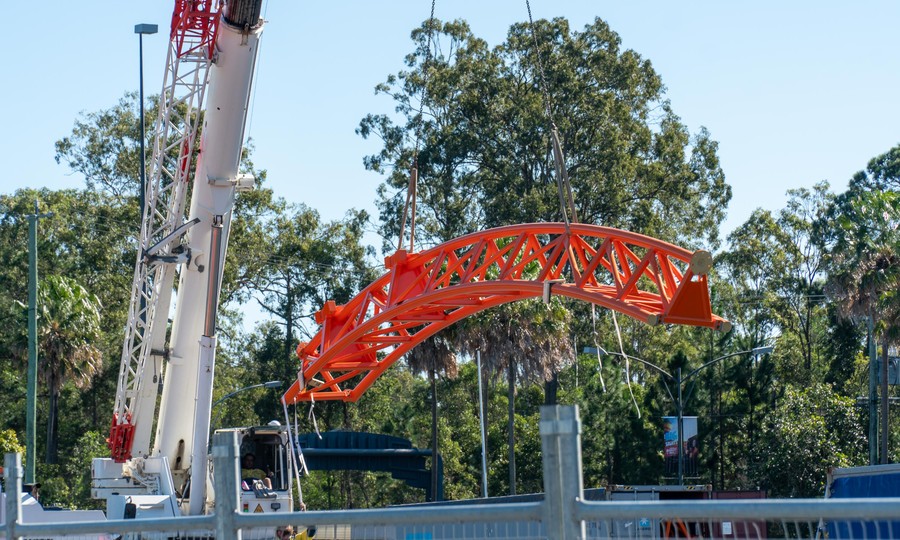 Last August Dreamworld announced a $30-plus million roller coaster that was due to open this year as part of a major investment and a comeback strategy for the struggling theme park.

The roller coaster itself has reportedly been paid for to German ride manufacturer Mack Rides, but as parts arrive Dreamworld have indicated that paying for its physical construction will be difficult.

In an interview with the Gold Coast Bulletin, chief strategy officer Paul Callander has said that revenue being lost as a result of the COVID-19 shutdown would have funded the construction.

"It certainly requires funding. Ten million dollars is being burnt each month so that money when we are talking, about $17 million of contractor works, would have gone back into our capital investment."

Elsewhere the Gold Coast Bulletin piece suggests Dreamworld is losing $5-10 million a month as a result of the current shutdown.

As a publicly traded company that is aggressively seeking government financial support, it's safe to say these numbers being publicly released by a senior executive are based in reality.

The only problem is that if we rewind to 2016 – prior to Dreamworld's tragic Thunder River Rapids accident that plunged the theme park into its current state of financial disarray – then even their operating revenue for these same months during a normal, profitable year wouldn't cover the required construction costs.

Combined revenue for March through June of 2016 was $27.8 million, averaging less than $7 million a month. Revenue for these same months a year later plummeted to $17.9 million and is still yet to recover significantly.

So we're led to believe that even if it was business as usual, best case scenario is Dreamworld would be running at a bare profit or loss with a plan that involves paying for a roller coaster to be built hand-to-mouth.

Even in a scenario where Dreamworld had finally returned to modest profitability on an annual basis, it's likely they would currently be running at a loss through these typically quiet off-peak months, and funds for this roller coaster would be coming from elsewhere within Ardent Leisure.

At the start of the year Dreamworld's owners had only $58 million in cash reserves across both Dreamworld and Main Event in the US. This was down from $92 million six months prior. Dreamworld ran at a $19.8 million statutory loss and the company as a whole reported a $60.9 million loss in the financial year ending June 2019.

If it seems unusual that Dreamworld would be banking on cashflow and dipping into already dwindling cash reserves rather than the certainty of bank loans to fund major capital expenditure like a $32 million roller coaster, that's because it is. Dreamworld has no access to debt facilities.

Dreamworld's instability has meant that Ardent Leisure have been unable to secure debt facilities in Australia. It's been speculated that this was a key reason for the cancellation of earlier announced attraction plans.

Ardent sold off their other Australian assets one by one – marinas, bowling alleys and health clubs – and by early 2018 they were left with Dreamworld (along with the modest SkyPoint) as their sole remaining Australian business. Proceeds were used to pay down debt and Ardent moved to a business model where their only access to debt was in the US, with a vague, unspoken plan to fund the Dreamworld recovery entirely with cash reserves and profits from Main Event.

The US$225 million (AU$326 million) debt facility Ardent announced in April 2019 is ring-fenced for Main Event, meaning this debt facility can't be drawn upon for Dreamworld.

The Dreamworld business itself can't support this investment and banks won't loan them the money so the only way to fund their $32 million roller coaster was to burn through cash reserves and rely entirely on flakey Main Event profits to get them through and hope that this roller coaster quickly delivers the recovery Dreamworld desperately needs.

It's a house of cards, pure and simple. One that came crashing down when cashflow at both Dreamworld and Main Event dried up once the coronavirus pandemic hit.

Dreamworld's chief executive officer John Osborne suggested to the Gold Coast Bulletin that they're seeking government funding in order to complete the project.

"It is shovel ready and will be a real boost to local construction jobs and the tourism industry. We remain optimistic that we will be able to complete this world-class attraction in 2021 and continue to work with government to achieve a realistic opening date and funding."

A major new roller coaster drawcard and a once-again competitive Dreamworld would be nothing but great for the Gold Coast's tourism industry. But long before COVID-19 this recovery strategy was little more than a very expensive gamble based on numbers that just don't stack up, that banks thumbs their noses at.

As they lobby the government for the ability to return to normal operations and stimulus packages, the question will be whether the undoubted flow-on benefits this will offer by way of construction, tourism and hospitality jobs and a rejuvenated tourism industry at a critical time outweighs the pure and simple fact that Ardent Leisure were in over their heads long before things went south due to government mandated shutdowns.