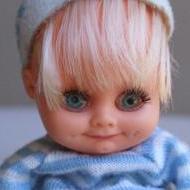 Hi. I'm a newbie here but read Parkz quite regularly. I love puzzles so I un-jumbled the Dreamworld Billboard.

This park has become such a joke