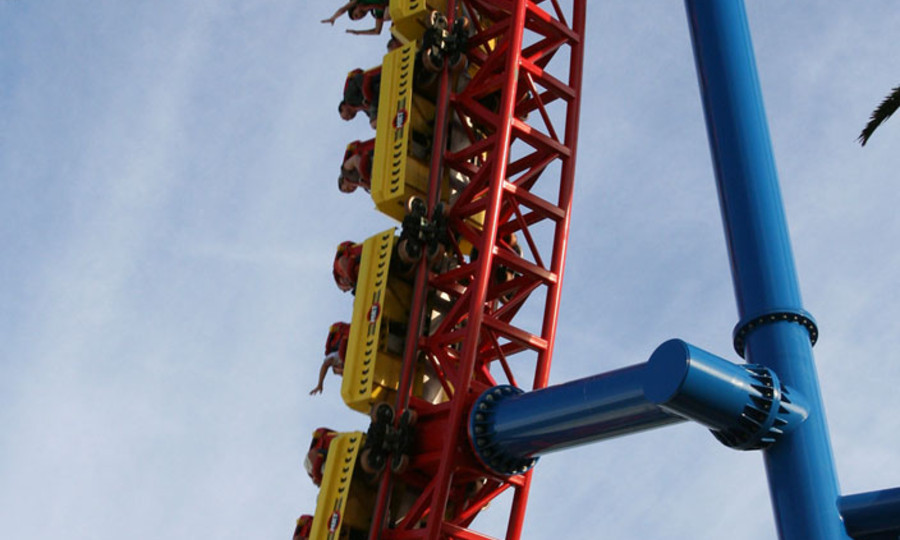 Image: Richard Wilson. Three-and-a-half years since Scooby-Doo Spooky Coaster opened the park welcomed the latest attraction, Intamin hydraulic coaster Superman Escape.
Editorial By Richard Wilson
22 January 2006
Tweet
With Scooby-Doo Spooky Coaster and Wild West Falls as the last two attractions (let's just forget "The Official Matrix Exhibit" exists), Superman sure had some tough competition in the theming department. The physical ride experience on the other hand. Well, Intamin's known for one thing and one thing alone - unparalleled smoothness. I don't think anyone out there thought this ride would be anything but the best coaster in Australia to date.

The premise for the ride seemed promising. Riders board a Metropolis subway. Earthquake hits. Superman comes to the rescue, which is where the launch into the coaster section takes you from. It sounds like a good way to create a plausible situation for a launched coaster.

The queue is meant to resemble a Subway platform. Aside from a single poster of the Metropolis subway route and a platform sign, there's little evidence of a subway station. I mean, where are the muffled announcements, horns and whistles, ticket booths or entry gates? A "roof" made from a lattice of painted 2x4s completes the queue's theming.

Assigned seating speeds up the entire queue. Even though it's a gamble as to whether you get the seat you want or not, it makes the process painless enough to mean it's no big deal to just queue again after your ride to try your luck once more.

One novel idea was to put a life-sized Superman figure on the back of the train, to make it look like he's pushing the train to safety, completing the story element. It's a shame though to see Superman in full view as you board the train, with no attempt made to hide it with so much as a curtain or some lighting. It really kills the idea of going for a peaceful subway commute.

The moment the ride starts you get an earthquake warning and the train meanders round a few curves at a reasonable pace. Once more the theming lets down with the subway tunnel. It wouldn't be too hard to have rendered the walls to make them look like solid concrete, instead of just giving them a coat of grey paint. Along the way there are a number of effects such as gas pipes breaking, advertisements on the walls rocking or walls of lockers rattling back and forth. Unfortunately it all appears like it was rushed through or not properly considered. It's a sequence that comes off feeling like something you'd see in the corniest of ghost trains. The effects are topped by a staircase gushing with water from a ruptured pipe, as seen on Universal Studios' "Earthquake" attraction.

As you head along, the police are heard trying to figure out what to do. They even throw in a little joke for good mix. Before long you come to a stop in front of a dead straight section of track that stares straight out into the bright light of the day. "It's Superman!" is heard shouted by a fellow commuter and a blue dot is seen racing towards the back of the train. A blue dot? Surely they could have come up with something a little more realistic than this. The Man of Steel assures us we're going to be alright as he thrusts us along the track out the side of the building.

From here you can forget about the theming, because it's just pure forces for the next half of the ride, starting with a 0-100km/hr launch in just two seconds. As a comparison, Tower of Terror at Dreamworld launches you to 160km/hr in seven seconds. A positive 4G turn points you skyward as you head up the near-vertical slope of the top hat.

The ride is packed into a tight spot. What this means is the elements are very small. Because of the tight radius of the top hat, you creep over the top very slowly, yet this is still enough to throw you out of your seat. Next up is the near-vertical drop into a tightly banked turn. Again because of the size constraints, this tight turn results in some incredible sustains positive Gs.

One word can describe the two camel back hills that follow - heaven. I've ridden my share of coasters across the globe, and nothing compares to the sheer force of the airtime on these two hills. Though the ride has over-the-shoulder restraints, they're a new design from Intamin that is really just a lap bar with thin shoulder extensions that don't come into contact with your body. I found that the ride wasn't as smooth as other Intamin coasters I've ridden, as these restraints aren't exactly soft and give little room for the neck to move around before the come into contact with the hard plastic edges.

A final turn leads into the brake run brings the ride to a very satisfying end that will have you dying for more.

Because of the two-station design of the ride, no belongings can be taken on with you. Rather than go down the Universal Studios path of providing free locker hire for the duration of the ride, Movie World has chosen to charge $1 to rent a locker for the ride. The solution to this is to either leave belongings with a non-rider or hire a locker for the day, which works out cheaper if you plan on riding enough.

It's certainly disappointing to see a themed attraction miss the mark, but thankfully an incredible coaster makes up for these shortcomings. Let's just hope in future the theming budget for thrill rides is increased so we can have a repeat of the previous successes.