Dreamworld has kicked off its birthday month with a bang delivering its biggest summer campaign yet and now, it’s time for the ultimate celebration as the park turns 38-years-old on Sunday 15 December. 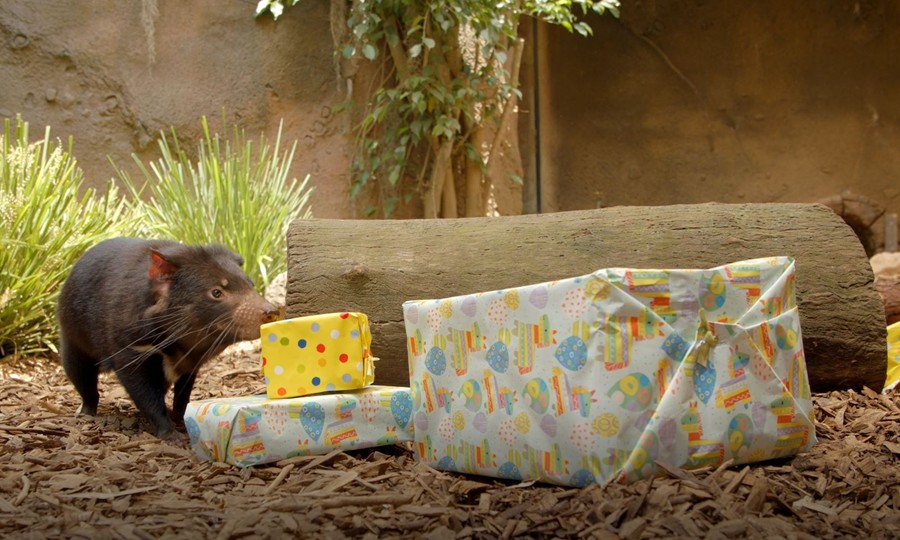 For the BIG day, Dreamworld’s fur babies celebrated in true form – by having their cake and eating it too.

From small feet to big paws, the park’s wildlife spent their morning bounding towards specially selected treats, serving as an enriching and fun surprise for the big birthday bash.

Dreamworld’s adult tigers and cubs made a splash in the Tiger Island plunge pool as they pounced for colourful birthday pinatas in the form of a 38.

The cheeky dingo trio; Kuppar, Kimba and Kiah, along with Blaze the Tasmanian devil, were served up a slice of meat cake, and Mupee the tree kangaroo had a bite of sweet potato delight, her favourite treat.

While their wildlife carers are focused around nurturing each animal by encouraging fun and play, General Manager Life Sciences, Al Mucci, says that they also have a great purpose at Dreamworld with each animal helping raise awareness and much-needed funds for their species in the wild.

“Dreamworld, through the Dreamworld Wildlife Foundation, is recognised globally for the conservation work we do, to help support threatened and endangered species,” Al Mucci, General Manager Life Sciences said.

“We have raised over $3.5million for carefully selected initiatives since the foundation was founded in 2012, with majority of the funds stemming from fundraising drives and wildlife encounters throughout the park.”

It’s no holding back and table manners were out the window for the cutest cake smash of the season, to pay tribute to the day Dreamworld first opened its gate to the public.

The birthday cheer was shared throughout the entire Dreamworld family, filling every corner with joyous celebration, with team members jumping on board in wishing the park a “Happy Birthday”.

After 38 years, Dreamworld has blossomed into Australia’s biggest theme park; comprising an all-inclusive experience with rides, slides, wildlife and shows, and today employs more than 1090 people across a variety of roles and industries.

“Dreamworld is the Gold Coast’s most nostalgic park and today we celebrate what makes us so unique as well as everything exciting on the horizon for the park,” Mr Mucci said.

Initially opening with five key attractions and rides, the park is now home to over 40 rides, slides and attractions, including Australasia’s first flying theatre and soon the first waterslide complex to open on the Gold Coast in five years, plus a new world-class rollercoaster. In line with the new marketing direction for the park, delivering Australia’s Biggest Pass to Australia’s

Biggest Theme Park, Dreamworld is investing in all aspects of the park to continue delivering world-class, state-of-the-art experiences.