The Edge at Eureka Tower

A review of one of the newest thrilling experiences in Australia. Roller-Coaster.com.au takes a look at Eureka Skydeck 88 in Melbourne, and in particular, the Edge experience, a unique attraction that suspends visitors 285m above ground level, with only 45mm of glass separating them from the unthinkable. 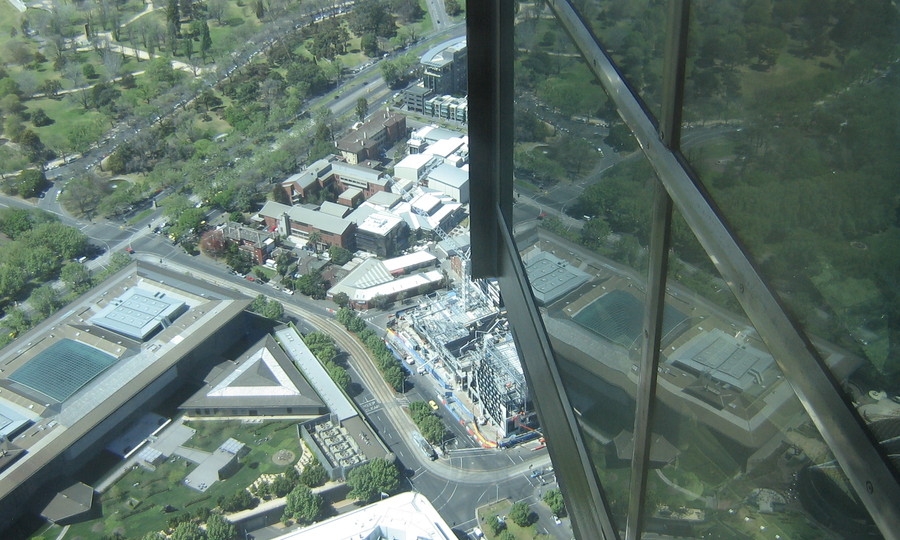 Vertical attractions seem all the rage at the moment. From thrill rides like Batwing Spaceshot, to observation points such as Q1, and the upcoming Southern Star Observation Wheel, clearly the public is drawn to uniqueness of a high up place.

The attraction starts at ground level, after purchasing your sky deck tickets (Edge tickets must be purchased separately at the top) you enter a dimly lit lobby area dominated by the "Serendipity Table", a large flat multi touch screen with icons drifting around. Snare one and some facts about Melbourne are revealed. If you miss, some ripples will appear as if it were liquid (it can be under sensitive though, forming an emu beak with your fingers and jiggling on the required point seemed like a reliable method to use). Essentially it forms the queue entertainment, though on this visit it was sufficiently quiet, so you could cruise on through to the lifts when your interest waned.

A speedy lift ride brings you to the observation level, where you can take in fantastic panoramic views of Melbourne and its surrounds. A key advantage over the nearby Rialto observation deck is the fact the tower is outside of the CBD grid, which makes it possible to view the entire CBD from one point. The usual suspects such as coin operated binoculars, plasma information screens, a shop and a windy outdoor viewing point accessible via an airlock are available. One of the more unique features is moving LED marquee signs that run across the floor and walls at odd angles displaying facts about Melbourne. Directional speakers are on the roof, so for instance when facts about the Melbourne Cup are displayed on a marquee near you, expect to hear the thunder of hooves. It's a unique feature, but somewhat impractical if all you want to do is read everything available. Yet another of the tricks in play are sloping floors in strategic places (such as leading in toward an tight corner of windows) to tease those already a bit unsteady on their feet. One sorely missing feature though is the lack of signage indicating what landmarks are in each direction. While the view is obviously enjoyable, it might be a bit of a downer for non-local visitors if they don't know exactly what they are seeing.

But it was time to move on to something more thrilling, an attraction within an attraction, the Edge Experience. At $12 a go it is somewhat pricey, though comparable with the Skyway at Scenic World, which offers a similar feature set. Essentially, it can be summed up as a glass box that is moved out from the façade of the building with up to 12 riders within. The glass used is a polymer dispersed liquid crystal switchable glass, which in an instant can change state from a milky white to transparent, a property the Edge uses to great effect.

The attraction seemed to be virtually a walk on, so wait times essentially depend on when visitors were willing to – in the most figurative sense possible – take the plunge.

Before boarding guests are issued with shoe covers in order to protect the glass. The rectangular box you move into is split in two, you enter into a gloomy holding room where you are told to place loose items (which unfortunately includes cameras), and a swing door leads to the actual glassed in area. The operator gives you a quick run down of things, before heading out and sending you on your journey.

The ride begins, and the box projects out of the building. Light begins to flood in as you edge further and further out. The fearsome attempts of the designers become apparent as a fairly loud sound system plays the sounds of what is obviously rusted machinery. The box seems to shudder slightly as it moves out, wether this was intentional I don't know.

The more nervous riders seem to gravitate towards the perimeter of the chamber gripping the handrail, or plant their feet on the metal joins between the glass panes, while the thrill seekers stand as far from the door as possible in the centre of the panes.

You await the inevitable, and then it happens. The glass becomes clear and you are exposed, left staring at the ground below, with nothing but air surrounding the chamber. You are afforded great views of Melbourne Park and St Kilda, though it's location directly beside the outdoor observation deck means the view to your left is essentially a mesh barrier. Surprisingly though, it isn't as scary as you would imagine, no jelly legs here, though jumping can add a bit of spice. The nature of the attraction seems not to be a deterrent to many either, even grey-haired ladies were giving it a go. If it does prove too much however you are free to make a dash through the swing door to the calm of the holding room.

Your 4-minute experience is briefly interrupted as a staff member communicates via microphone and takes your photo. Separate groups don't present a problem, as you just shuffle around and as many pictures are taken as necessary. Priced at $15, a photo isn't cheap, somewhat disappointing considering that is more than the experience itself.

The show continues, the sound of glass cracking can be heard, and at the same time panes flicker on and off randomly around you. But soon your trip comes to and end and the box retreats back into the building with guests using one last chance to take it all in.

The attraction is certainly something unique and obviously not for everyone. If heights aren't your thing stay well clear, but if they are it will be enjoyable more than anything else. It is sharply presented and visually quite safe given the centre of gravity of the moving room remains in the building.

The Skydeck itself is well worth the price of admission, though the Edge is predictable in a way, so it is up to the individual to observe, and decide if they wish to pay extra for this too.