Visitors to the Gold Coast were able to get up close and personal with some of Dreamworld’s cuddliest team members at Broadbeach today as Dreamworld joined the GC2018 celebrations. 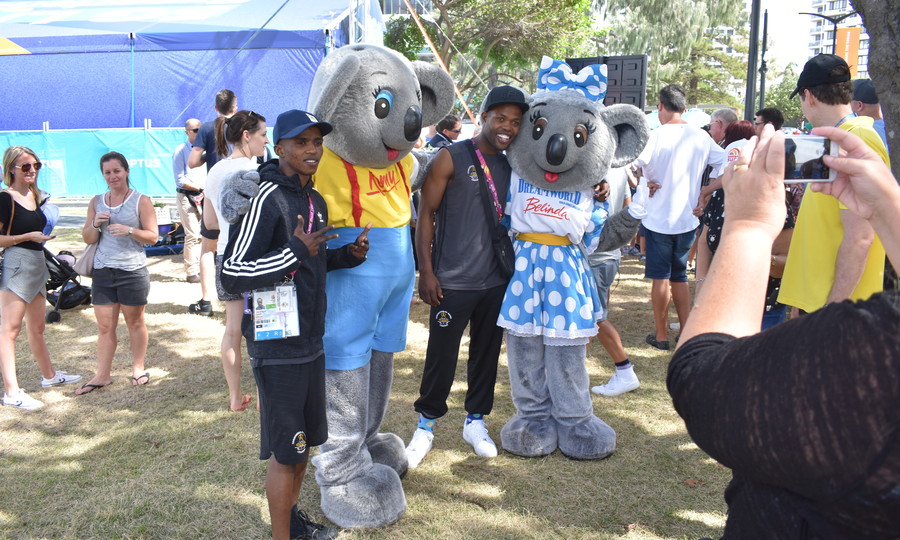 Minister for Tourism Industry Development and the Commonwealth Games, Kate Jones joined Dreamworld CEO, Craig Davidson at Kurrawa Park today with Dreamworld mascots Kenny and Belinda in tow along with native wildlife from the theme park, much to the delight of locals and visitors.

The offer of free single-day tickets to Dreamworld and SkyPoint for athletes, volunteers and accredited media leading up to and during the games has proved to be a hit, with thousands of people taking advantage of the offer.

Those eligible can visit Dreamworld and SkyPoint for free as many times as they like until Sunday 15 April, and friends and family of athletes and volunteers can access discounted tickets through the Destination Experience Program

“We have been very pleased to see thousands of local and international athletes, volunteers and media visit Dreamworld and SkyPoint during the Commonwealth Games and we look forward to welcoming even more over the weekend as the events come to an end,” said Dreamworld CEO Craig Davidson.

The Dreamworld team joined the celebrations in Broadbeach today to encourage all visitors to experience two of the Gold Coast’s most popular attractions while they are here.

“We’re delighted to be part of showcasing our city and its iconic attractions to the rest of the world and leaving a lasting impression on visitors. We look forward to reaping the benefits of the international exposure we have gained thanks to the Commonwealth Games in the years ahead.”

Minister for Tourism Industry Development and the Commonwealth Games Kate Jones said attractions like Dreamworld and Skypoint are an important part of the Gold Coast’s diverse offering of tourism attractions.

“We’re committed to helping Gold Coasters make the most of the Commonwealth Games and that’s exactly what Dreamworld has done,” she said.

“It’s important we put our best foot forward during the Games to ensure visitors to the Coast keep coming back.”

Dreamworld’s wildlife and cultural experiences have proven especially popular with visitors to the park in recent weeks with the added bonus of being able to meet new tiger cubs Mya and Melati at the all new Tiger Island.

SkyPoint Observation Deck on top of the Q1 building in Surfers Paradise has also been a popular option as the best place to take in the Gold Coast with spectacular views of the entire region.