The Log Ride joins Tower of Terror and Wipeout as the third major ride to close at Dreamworld in twelve months and one of many in recent years. 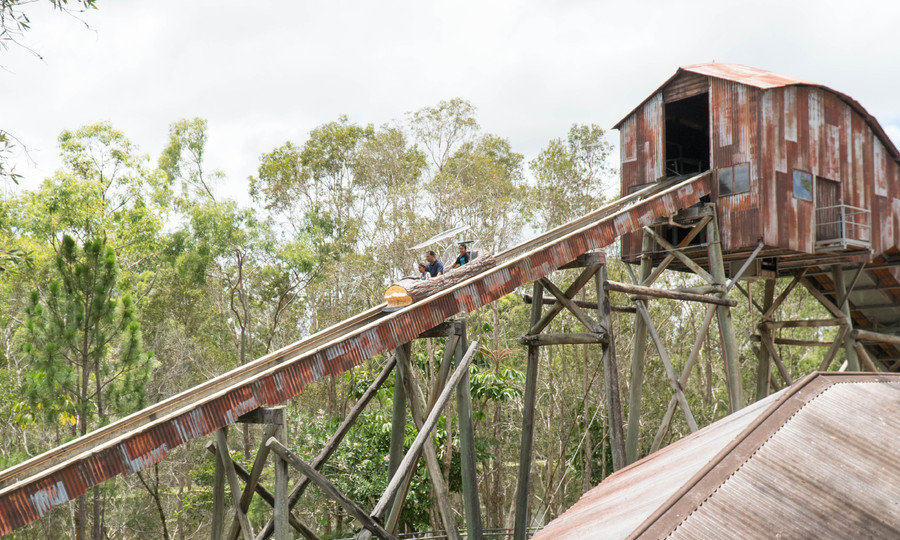 On Friday Dreamworld quietly announced the permanent closure of Rocky Hollow Log Ride, ending months of speculation about the inevitable.

In order to continue Dreamworld’s journey as Australia’s biggest and best theme park, the Dreamworld team has made the decision to retire the Rocky Hollow Log Ride, which opened 38 years ago on 15 December 1981.

Dreamworld guests should be assured that this decision to not reopen the ride following its recent scheduled maintenance has been made to allow us to continue developing new experiences for guests while taking proactive steps to deliver a new generation of rides.

Conspicuous timing aside – they only realised it couldn't reopen conveniently just after the peak summer holiday period? – the announcement of its closure is more sleight of hand than a genuine, concrete announcement about the park's future.

With Rocky Hollow Log Ride gone, one more piece of original Dreamworld is finished. Only Dreamworld Express and Vintage Car Adventure remains from Dreamworld's 1981 opening, though neither have much in common with their opening day presentation.

With this ride gone, so too is one of the few truly family-friendly attractions on the Gold Coast. Sky Voyager and Movie World's Justice League: Alien Invasion 3D might be the last two rides remaining that offer genuine enjoyment for that "5 to 95" age bracket.

There's no question about it though. The Log Ride had done its dash. Approaching 40 years old and out of step with modern water rides in terms of design, the writing was on the wall for a long time. It's reasonable to assume we would have reached this point with or without the Thunder River Rapids accident plunging every vintage attraction at Dreamworld into doubts about their future.

Well, at least the cages are gone

When it finally reopened after the Thunder River Rapids accident in early 2018 it had changed significantly. A truly ridiculous attempt was made to bring this ride up to 21st century standards by adding crude cages to each boat. Expansive caves and other theming was removed, leaving the ride feeling a whole lot smaller and more uninteresting than it ever did.

Even in its heyday this ride was more about the theming and atmosphere than the physical ride experience. Owing to its in-house design and fabrication, there was never a lot going on with this ride, even by 1970s log flume standards. But it meant that even with its 12 metre drop it was never intimidating to even the youngest children and it always offered mild thrills that any adult can enjoy.

And of course it was a great way for the family to cool off together on a hot day.

The ride was perennially popular. Or rather it was before Gold Rush was shuttered and foot traffic to this corner of the park dwindled. But nonetheless it was a Dreamworld staple and its closure leaves another large void in the theme park's already paper-thin lineup of attractions, particularly for families that have outgrown the children's rides of ABC Kids or DreamWorks but are still too young for the park's few remaining thrill rides.

In many ways, the void left by the Log Ride's closure is far more noticeable and impactful to the average guest than that of last year's Tower of Terror and Wipeout closures. There's just so much to be said for attractions that an entire family can enjoy together, and there's a reasons that flumes and other similar family experiences form the backbone of every Disney theme park in the world.

Dreamworld – and competitors Village Roadshow – have turned their back on this style of inclusive family attraction in favour of major thrill rides and attractions aimed at young children, effectively ignoring any family with children too old for a meet and greet with Wiggles characters or Batman..

We've been saying it for years, but the concept of a family attraction seems completely lost on Australian theme parks. Somewhere along the way the concept of a ride the family can enjoy was replaced by generic kids rides plastered with logos and faces of cartoon characters.

It wasn't always this way, but the experience offered at the Gold Coast theme parks couldn't be more fractured, and in losing the Log Ride, Dreamworld has lost one of their biggest competitive advantages, particularly as Sea World hesitated and ostensibly scrapped their own plans to rebuild the decaying Viking's Revenge Flume Ride.

But hey, the Log Ride's gone but did we mention we've got a big roller coaster and new stuff coming for very young kids??

One step forward, two steps back

In their announcement, Dreamworld have taken the always reliable "ooh look over there! shiny things!!" approach to public relations. There's no shaded seating disaster here, but instead they've cobbled together a handful of unrelated developments that have no links to the closure of the Log Ride. They try their hardest to make you think this is why the Log Ride is going.

There's a Mary Poppins song about washing down bad news with something good, but the Simpsons parody is far more fitting to Ardent Leisure's modus operandi.

Even with Sky Voyager opening in 2019 and a new major roller coaster due later this year, Dreamworld are far behind where they should be thanks to other recent closures like Wipeout and Tower of Terror that only added to many years of neglect, inadequate investment and ride closures.

The forthcoming Blue Fire launched coaster has been trotted out yet again in distracting from the Log Ride's closure. But we've already been told that the roller coaster is a replacement for Wipeout. Or is it a replacement for Tower of Terror? Or is it part of a post accident recovery strategy? Or is it playing catch-up on competitors who have outspent Dreamworld on new attractions for many years?

If you believe Dreamworld and owners Ardent Leisure in their statements in recent months and years, then it's all of the above. That's one hell of a silver bullet.

The goodwill Dreamworld are slowly clawing back from a distrusting public is not being helped when every positive step is being milked for everything it's worth and the narrative of reinvestment and expansion simply shapeshifts to mitigate whatever closure or cutback they make in a given month.

Indeed pulling Dreamworld out of a hole created by 20-odd years of neglect isn't cheap. And it can't all happen at once. No one expects a full recovery overnight.

Rocky Hollow Log Ride's closure was anything but sudden. Predicting and planning for the future of a 38-year-old ride isn't exactly rocket science and should have factored in so Dreamworld weren't caught – yet again – with their pants down scrambling for justification and misdirection.