Dreamworld ditches their only competitive advantages – sheer size and diversity of attractions – as they seek to be "comparable" in ride count to their nearest single competitor. Except their nearest competitor is actually four diverse and growing theme parks. 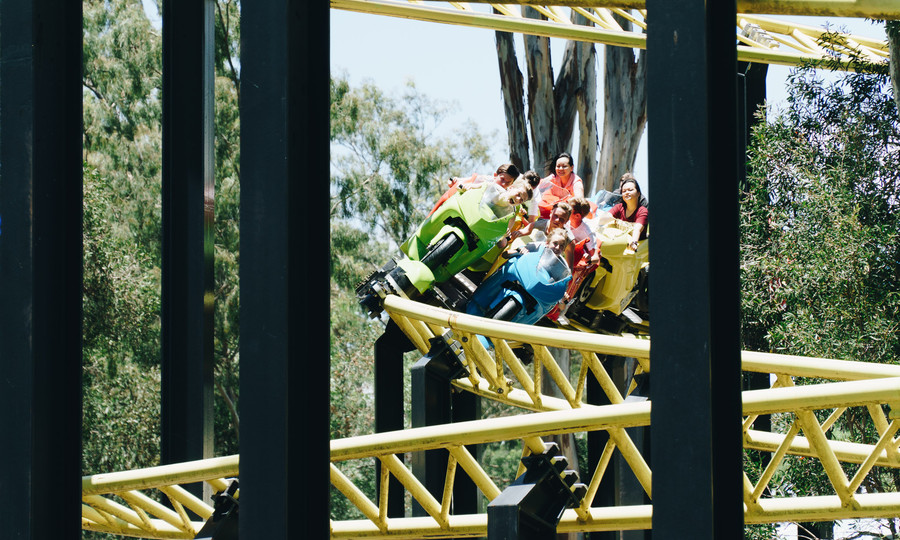 When Dreamworld announced its reopening several weeks ago, they preempted backlash as they announced yet more attraction closures.  In recent years Dreamworld has seen the high profile closure of Thunder River Rapids, Wipeout, Rocky Hollow Log Ride, Tower of Terror II. Only one new major attraction has opened in that time, last year's Sky Voyager.

Yet Dreamworld's already threadbare attraction lineup will become thinner as the theme park gears up for reopening in September. Ardent Leisure, the owners of Dreamworld have today cited a need to "remove duplication" as the reason for the permanent closure of Big Red Car and FlowRider.

Big Red Car Ride was the park's only substantive ride for young children, the park's only traditional dark ride as well as the anchor attraction for the ABC Kids area which is a mix of same-same kids flat rides that would be equally at home in any shopping centre or school fete.

FlowRider a pay-to-ride surfing simulator that has seen its popularity wane – perhaps in large part to its confusing location in a dry theme park (as opposed to WhiteWater World meters away), the transformation of its surrounds into a confusing mess of racing cars, beach theme and Trolls, as well as an overall deemphasis at Dreamworld on experiences and upsells as the business model moved towards repeat visitation from local residents.

The remaining ride count will be comparable to our closest competitor and presents a diverse range of kids, family and thrill rides.

It's a perplexing pivot for Dreamworld given perhaps the biggest criticism leveled at nearest competitor Warner Bros. Movie World is their lack of attractions to fill a day or warrant repeat visitation. Where Movie World has relied heavily on a small number of high quality attractions for its entire history – shows and immersive experiences in its earliest years before pivoting towards a modest but growing number of world-class thrill rides – Dreamworld's only lasting competitive advantage has been its sheer quantity and diversity of attractions that made it an enticing one-size-fits-all theme park for both single and multi-day visits.

While Ardent spins this race-to-the-bottom mentality as a move to meet market expectations, it misses one fundamental point, which is their competitor is not actually Movie World but rather the combined offering of all of Village Roadshow's Gold Coast theme parks that also includes Sea World, Wet'n'Wild Gold Coast and Paradise Country.

A leaner Dreamworld that merely aims to compete in quantity alone with the already thin offering at Movie World blatantly ignores one very basic fact of the market: Village Roadshow very successfully positions its four theme parks in almost all marketing and advertising as one singular product.

The move to downsize Dreamworld and to compete like-for-like with merely one component of their competition is all the more perplexing as Village has made moves in recent years to make each property a fuller, standalone theme park experience, with unique new thrill rides at the ride-starved Sea World, increased diversity at Movie World with the likes of Movie World Junior Driving School or DC Comics Super-Villains Unleashed and a more themed, locals-friendly offering at Paradise Country with Shaun the Sheep to name a few.

Even with the forthcoming introduction of their first major thrill ride in two decades, Dreamworld are still well behind in terms of the diversity and quality of Village's collective ride experience between Movie World's current offering or Sea World's upon completion of Vortex and Leviathan.

An unspecified 5,600m² parcel of land at the theme park was also sold off in June and WhiteWater World will shift to seasonal operation on a permanent basis. The animal and cultural offerings of Dreamworld Corroboree will remain closed until the return of interstate and international tourism, leaving the physical footprint at Dreamworld a fraction of its once sprawling self for the forseeable future.

There's no question that all of the Gold Coast's theme parks need to shift to a leaner, smarter style of theme park in these times of uncertainty. But where Movie World and Sea World have both signaled a long-term desire to move on from a "less is more" approach, Dreamworld looks set to retreat to a market-follower, underdog strategy that has been resoundingly unsuccessful for the loss-generating theme park for several years.