From Big Dipper to Cyclone to Hot Wheels SideWinder

Formerly the Cyclone – and the Big Dipper at Sydney's Luna Park before that – Dreamworld today relaunched the 1995 steel roller coaster as Hot Wheels SideWinder, sporting a replacement train and children's toy theme. 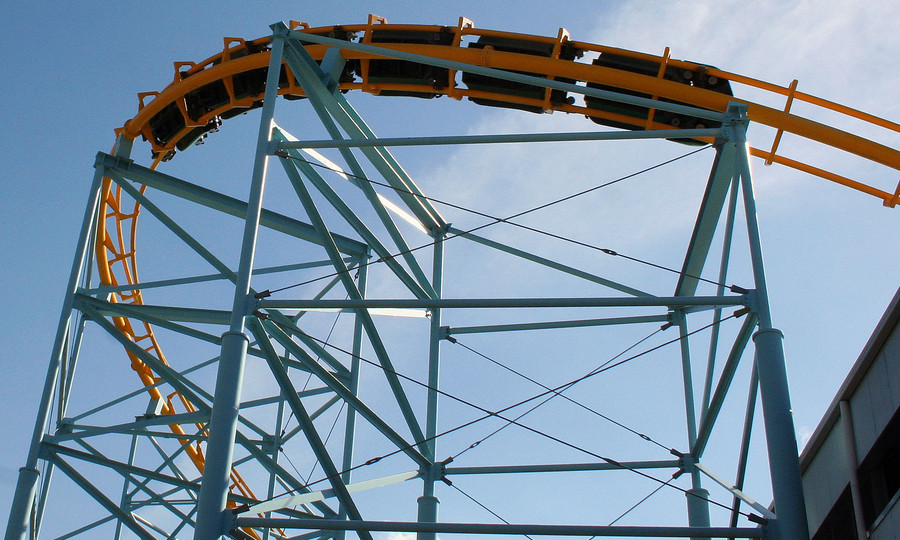 Formerly the Cyclone – and the Big Dipper at Sydney's Luna Park before that – Dreamworld today relaunched the 1995 steel roller coaster as Hot Wheels SideWinder, sporting a replacement train and children's toy theme.

Originally opening in 1995 at Luna Park in Syney, the ride has had a history that is far more eventful than the tame roller coaster.

Custom built for Luna Park at a cost of $8 million, the ride's design tried to make the most of a narrow space that had to dodge historical buildings, other rides and park infrastructure. Despite its impressive height, the ride was ultimately fairly modest. A tame, shallow first drop was followed by a series of uneventful turns that led to two inversions: a sidewinder and vertical loop at the climax of the ride.

By today's standards – and even 1995's – the roller coaster is something of a relic, built as one of the final traditional looping coasters by Arrow Dynamics, a company that pioneered the style in the 1970s but whose lagging innovation was overtaken by European manufacturers in the 1990s who delivered smoother, more thrilling and more technically advanced rides that to this day lead the industry.

The rejuvenated Luna Park was shortlived after local residents complaints caused severe restrictions to be placed on the ride's operations. Only 13 months after it opened, Luna Park was closed on 14 February 1996. Save for a handful of events such as the Sydney Olympics in 2000 and a series of filming commitments, the ride sat dormant until it was sold for a price of $3 million, disassembled and relocated to Dreamworld.

At Dreamworld the roller coaster was hastily rebuilt, with a total budget for the project sitting at only $5.5 million, a fraction of its original cost. The topography of its new home necessitated the extension of many supports that saw its loading station perched high above the ground.  An onerous, spiraling queue building was erected and haphazardly joined to the loading station that made queuing both confusing and unpleasant. Anyone that rode in its first few years will recall the bizarre series of stairs and platforms that snaked under and over the ride in order to exit and return to the ground.

The theming of course was equal parts complex and nonsensical. Local newsreaders read fake bulletins and an inexplicable turbine sat in the middle. The story was complex but vague and ultimately pointless; it was exactly what you'd expect a group of managers to come up with if they anointed themselves creative directors (and then went on a reconnaissance mission to Universal Studios to steal ideas).

When WhiteWater World was built, designers took the opportunity to intertwine slides around the roller coaster and the associated landscaping meant that the ride finally looked like it was meant to be there, replacing the disused road and carpark that once surrounded the ride. With this, most of the bizarre theming was rendered useless, as the queue was directed to the outside of the spiral building to ensure that queuers would spend their time looking at the water park as a tactic to drive patronage.

As Cyclone, Parkz has given the ride an aggregated rating of 53% from members' reviews (at time of publication), which sees it trailing fellow Dreamworld ride Motocoaster and Melbourne's 100 year-old Scenic Railway as the lowest rated roller coaster in Australia.

Following in the footsteps of Sea World's widely panned conversion of Corkscrew to Sea Viper in 2009, and the more successful transition from Lethal Weapon to Arkham Asylum at Movie World in 2012, Dreamworld have more than just renamed the ride but comissioned a brand new train from Dutch manufacturer Vekoma.

Sea World and Movie World entered into a partnership with KumbaK for their replacement train projects. For Corkscrew/Sea Viper the new trains made the ride the rougest it had been in its nearly 30-year life. Riders were apparently not all that the new trains damaged, with reports suggesting that the ride's closure and removal earlier in 2015 was hastened by the new trains. They had more success with Arkham Asylum; salvaging parts from the ride's original two Vekoma trains they built new seating assemblies that feature seatbelt shoulder straps that remove all side-to-side headbanging and made the coaster surprisingly smooth.

Vekoma have been offering replacement trains for their looping coasters for  several years, with reports from international installations suggesting that these trains are the best thing to happen to the company's older looping coasters. While Vekoma used a licensed version of Arrow's track for its early coasters, it was always their engineering that got them into trouble, with ambitious track layouts – many designed by Werner Stengel, whose company is responsible for most of the world's smoothest, technically complex and boundary-pushing coasters – combined with Arrow train technology that simply couldn't handle the track.

Arrow Dynamics' early-90s engineering on the ride's track will always be its weakest link, with transitions into turns and elements abrupt and the track fabrication being noticeably primitive. However it's highly likely that this transformation from Cyclone to Hot Wheels SideWinder is one that wins the ageing coaster a few new fans and will breathe life into the ride as it enters its third decade.

For Hot Wheels SideWinder, Dreamworld are also promising on-ride audio. A gimmick that Movie World has toyed with to underwhelming success with both its Arkham Asylum and Green Lantern coasters, on-ride soundtracks provide a combination that no one wanted: the awe and spectacle of hurtling around a gargantuan steel track, plus difficult-to-hear music.