Two new female white tiger cubs have arrived safe and sound from Japan in their new home at Dreamworld as the park prepares to upgrade their tiger facility with a major facelift. 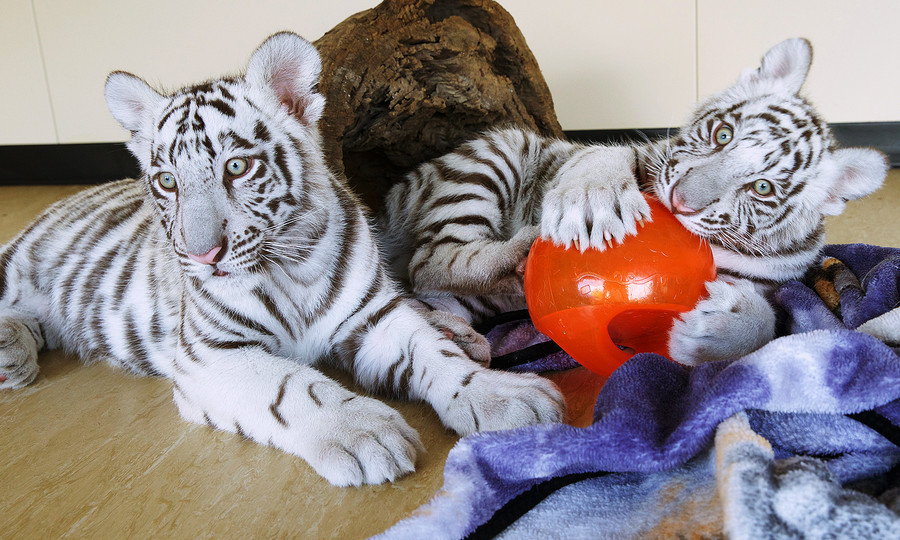 Image: Dreamworld. The two yet-to-be-named cubs will be on display at Dreamworld from this Friday.
By Richard Wilson
18 February 2016
258
Shares
Tweet

Born on November 2, 2015, the 15 week old cubs touched down at Brisbane Airport this week and will be available to view at Dreamworld from Friday February 19, 2016.

Currently without names, the pair will become adopted sisters to seven-month-old cub Kai and his siblings Adira and Akasha, now 11 weeks, all born at the park as part of the Tiger Island conservation breeding program at Dreamworld, supported by the Dreamworld Wildlife Foundation.

Dreamworld CEO Craig Davidson said the new cubs were important for the long term sustainability of the park's interactive tiger program which helps to educate and raise awareness of these endangered species.

"It's fantastic to secure the long term future of tigers at Tiger Island and see the return of white tigers to Dreamworld. White Tigers have lived long and happy lives at Tiger Island since 1995 and we still have their descendants here today."

"Our handlers have already formed special relationships with the cubs and they are travelling well," Mr Mucci said.

Tiger Island turns 21 this year, and for the occasion Dreamworld are set to unveil a facelift that is will transform the perennial favourite.

Full details are yet to be released, however Ardent Leisure, owners of the Gold Coast theme park, yesterday announced in their 2016 Half Year Results that work will commence next month on the attraction.

One of the most popular areas of Dreamworld, Tiger Island, is set to undergo a major refurbishment commencing in March 2016. Guests will enjoy a world class animal exhibit focused on conservation and breeding programs for the endagered species.

Dreamworld's website announces a new Tiger Cub Kindy exhibit to open next month, likely as an interim measure while extensive construction work takes place in the main Tiger Island area. The Zombie Evilution laser tag attraction was recently fenced off, prompting suggestions that it may become part of Tiger Island.

Plans for the "new" Tiger Island are not yet apparent, but as early as February 2015 there was speculation about plans to upgrade the attraction from its current walk-through style into an arena show.