Months of speculation may be coming to a close with crates from Mack Rides spotted on site at Warner Bros. Movie World today on the location expected to be the home of the park's hotly anticipated 2017 roller coaster. 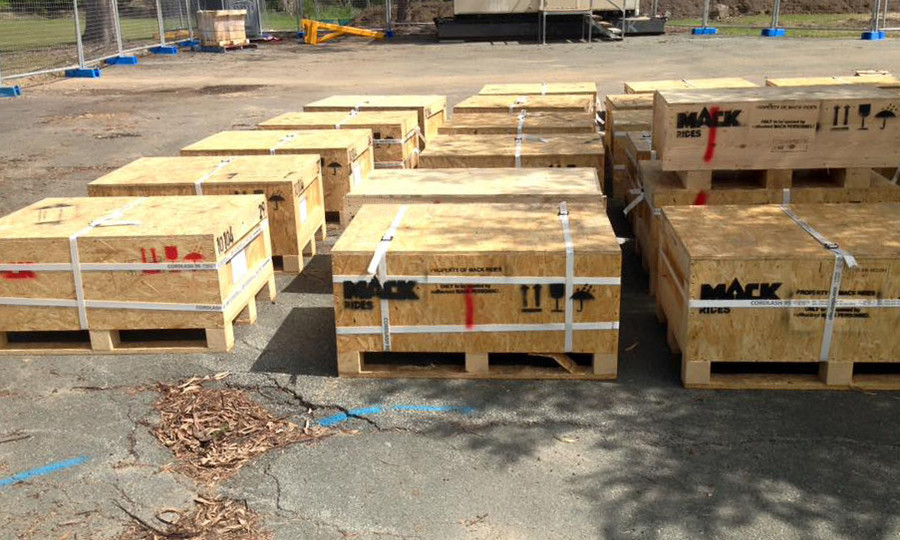 Image: Theme Parks a Go-Go. Crates from Germany's Mack Rides are now on site at the recently fenced-off site expected to be the home of the park's 2017 roller coaster.
By Richard Wilson
1 September 2016
168
Shares
Tweet

Mack Rides are the manufacturer behind Scooby-Doo Spooky Coaster as well as Sea World's Storm Coaster. Well known for family-oriented rides like these, the company in recent years has made a name for itself with envelope-pushing extreme coasters.

RCDB's entry for the anticipated ride has been telling us for months to expect a Steel, Sit Down, Extreme roller coaster in 2017. With the manufacturer now highly likely to be Mack Rides based on the equipment seen on-site and the sheer expanse of land set aside for the attraction that is still over a year away, Movie World could well be planning a Mack Mega Coaster (hypercoaster) or Launch Coaster.

Parkz speculated in July that one of the most reliable ways for a theme park to build a world-class, top-10 roller coaster is with a hypercoaster. Though it is currently Swiss manufacturers B&M and Intamin that dominate this category, Mack Rides are building acclaimed roller coasters at an increasing rate with the development of their own track and train technology that allows taller and faster roller coasters than they've previously built.

Village Roadshow's co-Chairman and CEO Robert Kirby suggested in November 2015 that they were comissioning a major theme park attraction, while a development application was submitted to the Gold Coast City Council for the construction of a roller coaster.

With crates on site so early in construction, they're not likely to contain any recognisable ride parts. The mass of identical wooden containers are likely be components relating to the foundations and footings for the roller coaster's support structure.

It's what's on the outside that is significant– the spraypainted Mack Rides logo.

The attraction is expected to debut in late-2017, while Doomsday Destroyer, the park's newest thrill ride is due to open next month.