Cranes appeared at Movie World yesterday in preparation for the installation of DC Rivals HyperCoaster's crowning feature: a giant illuminated depiction of The Joker towering over the monolithic roller coaster. With the ride's opening expected any day now, strong winds today have left construction crews playing the waiting game. 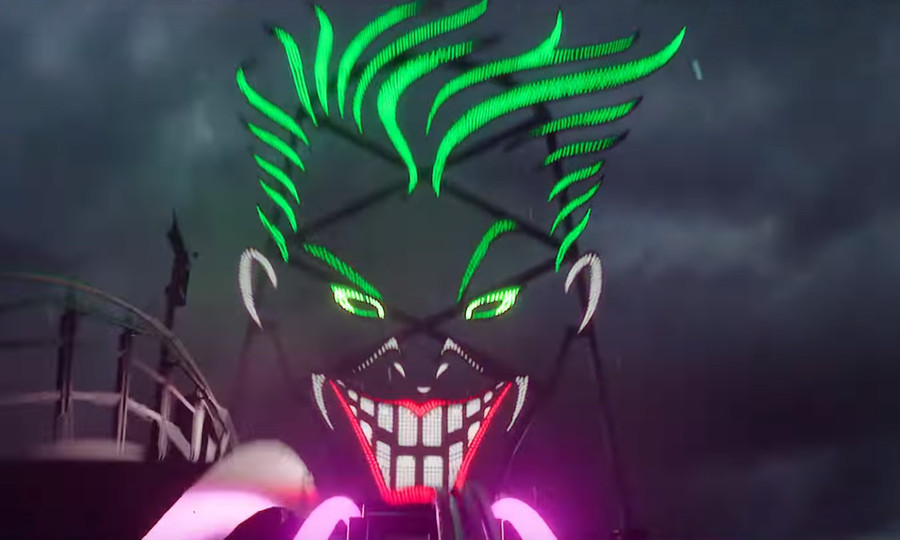 With DC Rivals HyperCoaster nearing opening day, the neighbouring ride Green Lantern Coaster has been temporarily closed while cranes were brought in and assembled for installation of The Joker's head.

Yesterday this crane and several others appeared on site at Movie World.

This morning cranes were in place at the base of the ride's 61.6m tall structure and The Joker fixture was extensively rigged with ropes and lifting slings in preparation for hoisting into position.

But weeks of perfect Gold Coast weather were upset this morning with gusts of wind that seemingly makes hoisting the steel sculpture 70-odd metres a difficult prospect. While the roller coaster is designed to easily withstand once-in-a-generation weather conditions far greater than today's windy conditions, lifting these remaining pieces into place is another matter.

The Bureau of Meteorology predicts that winds will ease later today.

The Joker's face is to be a feature like no other. The bold, illuminated sculpture will be visible for many miles and is set to become perhaps the defining icon of the Gold Coast theme park.

You'd be hard pressed to come up with any other roller coaster in the world with such an audacious display, befitting a thrill ride like no other ever built in Australia.

The commissioning of the roller coaster appears to have progressed without any major hiccups. Staff at the theme park have reportedly commenced training ahead of a low-key public opening during the upcoming school holidays.

The Gold Coast Bulletin reported that the ride will be officially launched at an after-hours party late next week. Theme park guests however may be able to ride sooner.

DC Rivals HyperCoaster is the most anticipated new theme park attraction in recent memory and puts Warner Bros. Movie World on a new level as the park asserts itself as Australia's thrill ride capital.