Track comes down from DC Rivals HyperCoaster during annual maintenance

A significant section of track from Warner Bros. Movie World's latest and largest attraction has been removed less than a year after the attraction opened. 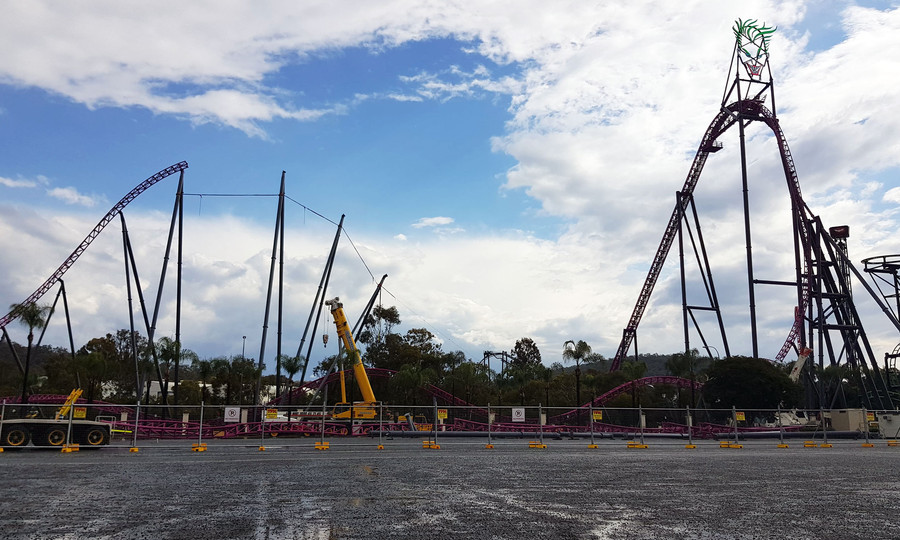 The bold step to remove sections of a ride isn't without precedent, though it is a rare occurence in the amusement industry where attractions are built to milimetre precision.

After a very successful first season of operation and as part of Village Roadshow Theme Park’s Technical Services and Mack Rides Engineering process of continuous improvement, some minor track adjustments have been identified to further improve what is Australia’s best and smoothest rollercoaster experience. This is currently underway and you can look forward to experiencing the ride again on 17th September.

The track in question is on the ride's "camel back" hill, a soaring 38 metre tall element that is also the ride's biggest source of airtime – or negative g forces – which gives riders the sensation of being lifted out of their seat. The ride was designed to feature around 2.6 seconds of sustained negative g forces at this point, with a peak negative force of -1.14g.

Surrounding the disassembled hill is a significant plot of land that would suggest the track adjustments are a significant undertaking.

While older steel roller coasters featured welded track and supports that were often fabricated manually, modern rides like DC Rivals HyperCoaster feature bolted sections that are designed with computer precision. This means that sections of track can be removed for tweaking – or even replacement – with relative ease.

Rides such as Maverick, Pepsi Max Big One and X2 are a few high profile roller coasters to receive significant track reprofiling early in their life, generally to remove elements that posed issues of excessive or undesirable forces that made the rides uncomfortable or difficult to maintain.