Sky Voyager is now open at Dreamworld... so what's it like? 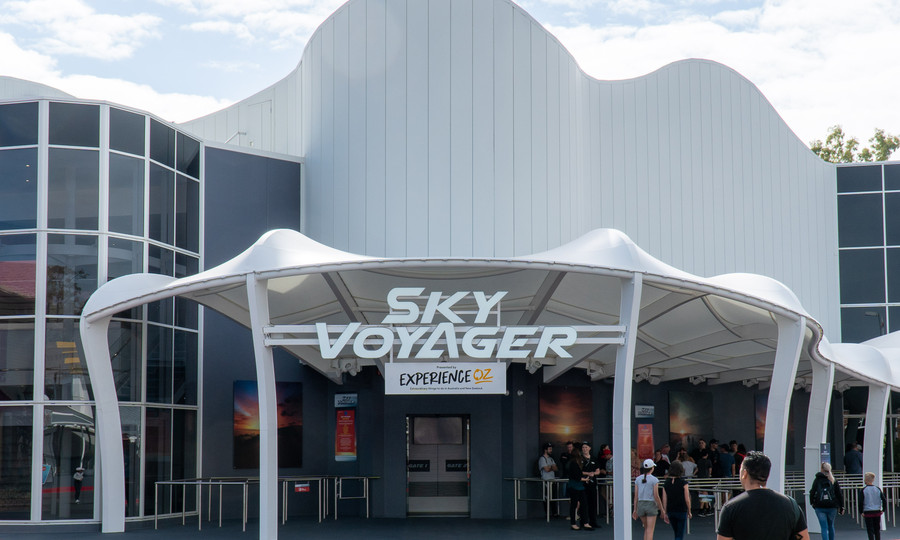 Months have passed and billboards dotting the M1 Motorway announcing Sky Voyager's summer opening have long since been replaced. Target opening dates came and went while Dreamworld's social media team copied and pasted the same cookie-cutter responses until they were threadbare.

But the wait is over and Sky Voyager is here. Forget opening attractions to coincide with peak holidays or pass renewal dates as is the norm; the opening of Sky Voyager came alongside Ardent Leisure's release of their full year results to shareholders. The message Ardent are eager to send to investors first and Dreamworld guests second is that all their troubles are behind them and the path forward is no longer rocky.

It's an attraction launch that carries with it a feeling of catharsis rather than the excitement you'd normally expect to surround the largest investment Dreamworld had made in a single attraction in 20-odd years.

Ultimately Sky Voyager is an enjoyable ride experience, marred by a clunky ride system and an overwrought pre-ride experience that is so outlandish and pointless that you wonder if it's the work of some master satirist out to create the ultimate theme park parody.

If the goal was to recreate the frustration, claustrophobia and cattle herding of modern air travel then Dreamworld have executed perhaps the most perfectly themed pre-ride experience ever.

The ride is split into three separate pre-ride rooms, each requiring an attendant to make a spiel before directing guests through to the next room. The first serves no purpose other than to await entry into the main preshow room. It's Disney style crowd control without Disney's eye for detail or gift for storytelling… let alone the crowds to justify the staffing requirements.

What's painfully absent from this counterfeit Disney pre-ride experience is any implementation of the visual cues and psychological tactics that Imagineers employ to seamlessly draw guests from point to point in the expeirence. Instead guests crowd and bottleneck in all the wrong places adding only chaos and extra staffing requirements to an already confused process.

It's in the main pre-show where things take a sudden dive – and we're not talking flight just yet. Following a tastefully presented Welcome to Country of sorts, guests' endurance is tested with an overly long montage of things and stuff. People, lifestyle, nature and flight are the buzzwords and we're treated to what feels like three hours of them.

What could instead be an indoor queue with air conditioning and an annoying video on a loop in the background (see: Scooby-Doo Spooky Coaster: Next Generation) is instead an outside queue up against a dull wall followed by a forced presentation that serves only to annoy.

There's no building of anticipation, no development of a theme or storyline. Just footage that looks like it was haphazardly pieced together from a Saturday afternoon lifestyle TV show. After this eternal deluge of aimless stock footage, guests are finally directed into yet another room with a screen for a safety briefing. Choose your spot wisely because where you stand dictates where you end up on the ride. If you're on the lower level stand on a "2" and upstairs choose "4" for the centre seats.

The seat selection is quickly undone as groups that want to be seated together unwittingly spread out across separate gondolas and confusion ensues. Why they didn't install queue switchbacks and opt for a simple single file process where guests fill the seats from one end to the other is anyone's guess. It worked on Wipeout for 25-odd years.

The safety video adds a hint of a theme as we're told to store loose items in the boxes provided by a group of Young Attractive People® in skydiving garb. It doesn't exactly match the clinical airport vibes of the building, or the piles of luggage in the room prior, but OK. At this point the arduous pre-flight experience comes to a welcome conclusion and riders are ushered into the main ride room.

Riders take their place in seats so cozy that Tigerair will probably see them and get some ideas. It's then a matter of navigating the seatbelts and straps that are unintuitive enough that it's unlikely there will ever be a ride cycle without a good chunk of the guests needing assistance. Had the safety briefing video been devoted to the boarding procedure rather than an excuse to inject an obtuse skydiving theme then the process might go a lot smoother.

But soon the handrails retract and we're on our way. The gondolas roll out over the edge of the platform and into the abyss. The pre-ride madness is quickly forgotten as daylight fills the expansive domed screen and we're on our voyage.

The footage itself – scenery from around Australia – is beautifully shot and at times truly magnificent. It's let down however by its rather low resolution that adds a significant barrier to full immersion. With the gentle movements of the gondola there's moments of thrill and awe, but just as many maneuvers throughout the ride that feel arbitrary or mechanical.

Riders are split across two levels, each with three 10-rider gondolas. The middle gondola on each level offers the best experience. If you're unlucky enough to find yourself towards the edges of the outer gondolas – as roughly a third of riders will – then you'll find yourself watching warped footage from a seat that tilts for some reason rather than on a physical experience that captures the wonder of flight.

There's spray from the tumultuous waves crashing on the Twelve Apostles and the sweet scent of grapes as you soar over a Barossa Valley vineyard. It's these added effects that work to tremendous effect and in many ways carry the ride beyond the limitations of its ride system and picture quality.

Where Disney's Soarin' inspires awe with its magnificent projection and graceful gondola movements that truly take you out of the moment and put you into that a glider, Sky Voyager offers mere hints of this sensation.

The attraction ends with a scene over a Sydney Harbour fireworks display – one of the few that truly gels -- and the gondolas retract as darkness descends. A voiceover welcomes us back to Dreamworld with an announcement of the current time as another gentle nod to the vague air travel theme. But weren't we skydiving a few minutes ago?

So it's no Soarin', but Sky Voyager is an enjoyable experience, albeit with a pre-ride experience will test every guest's patience if it's not completely rethought.

It's not without its flaws – both in the overall product Dreamworld delivered and in the Brogent i-Ride system at its core. It's certainly not the best way Dreamworld could have spent around $20 million to fix their most pressing issues. But Sky Voyager is here and brings a true family experience that has been sorely lacking across all the Gold Coast theme parks.