Movie World have finally dropped their first hints for their roller coaster under construction. From everything we've seen it's likely to be one of the world's best roller coasters, and you're going to want to ride it for yourself. 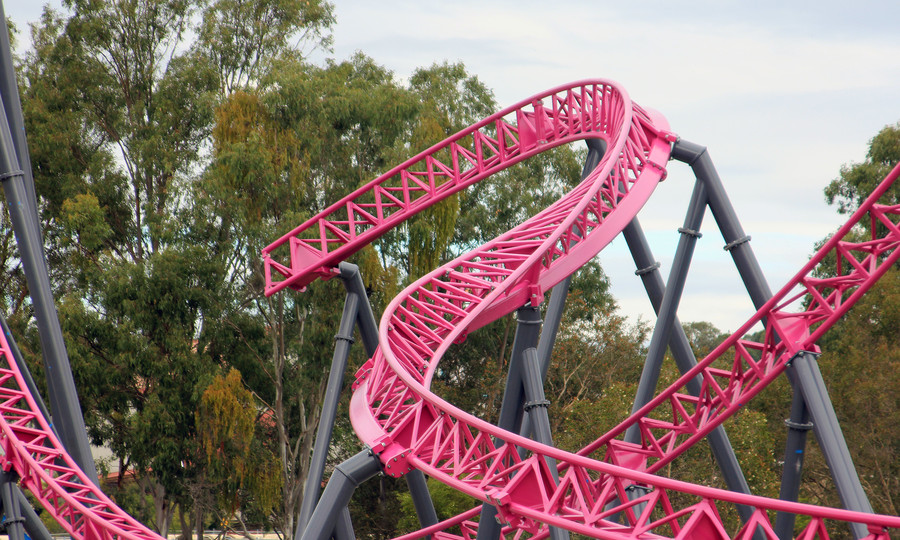 Image: Parkz. Australia's newest roller coaster is shaping up to be a truly world-class thrill ride.
Editorial By Richard Wilson
29 May 2017
466
Shares
Tweet

It's the most talked-about attraction in the 15 year history of Parkz, and it's not surprising why. It's the largest attraction – and likely most expensive – ever in Australia. Warner Bros. Movie World dropped their first hints last week. They are still yet to formally announce the ride, though from what we've seen and know so far, there's no question it's going to rival the world's best.

That right there could be the end of this article. Roller coaster perfection. A height of around 60m. A track length of nearly 1.4km. More drops, turns and hills than any roller coaster ever built in Australia.

Eight of the world's top ten roller coasters are hypercoasters. Warner Bros. Movie World aren't just building a ride to tick the obligatory add-a-new-ride-every few-years box, they're going all out to deliver a truly world-class ride that will put Movie World on the map.

Nothing tops a hypercoaster. Nothing.

Germany's Mack Rides were selected to design and fabricate the ride. The company leads the way in comfort, smoothness and are responsible for some of the world's most critically acclaimed roller coasters of the last few years. And the way it's shaping up, Movie World's hypercoaster could easily be the best roller coaster to date from the world's hottest roller coaster manufacturer.

It'll be longer than any roller coaster ever in Australia. It's been many years since Australia has had a really long roller coaster, and we've never had a particularly good long coaster. Thunderbolt (1982-2003) at Dreamworld was 1.2km in length, the The Bush Beast (1985-2004) was 975m. (The longest roller coaster currently operating in Australia? The 1912 Scenic Railway at Luna Park, 967m. Yeah......)

With a height of 60 metres or more it will be 1.5 times the height of Superman Escape, widely regarded as Australia's best thrill ride.

It's set to reach speeds of around 115km purely thanks to gravity as it coasts down a near-vertical first drop after a minute on a traditional chain lift hill to soak in the sheer height. 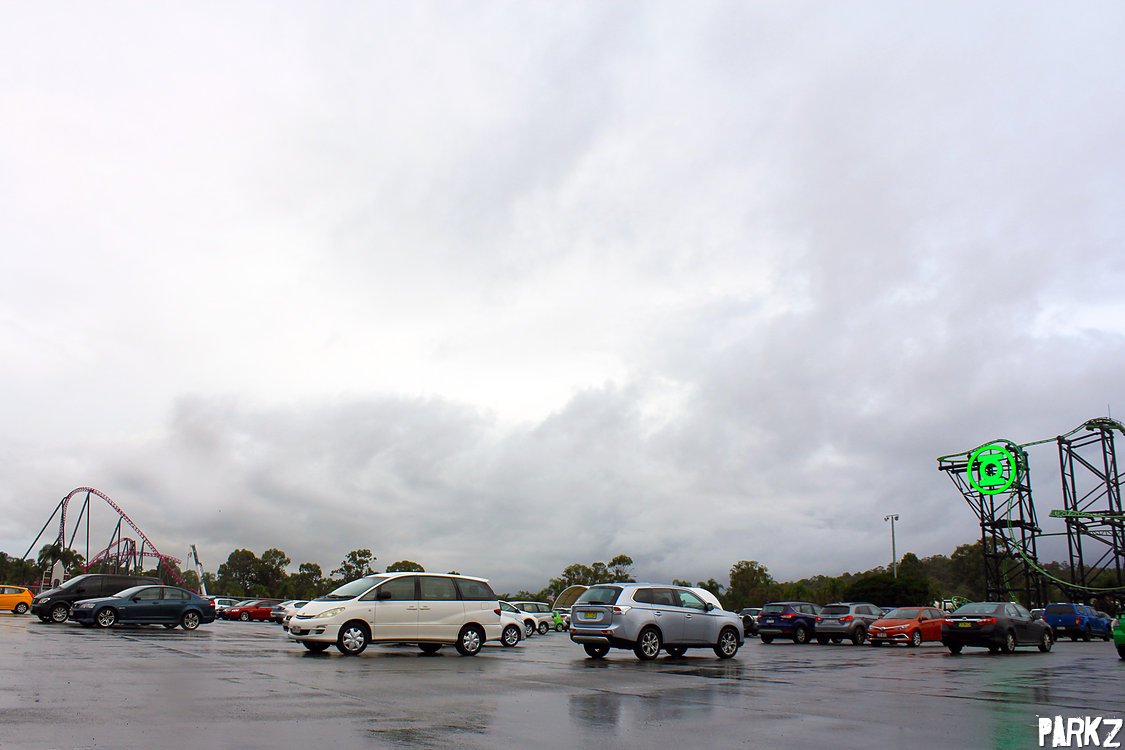 Track for the hypercoaster is in place to the left. When it is completed it'll fill this skyline and be around twice the height of Green Lantern.

The ride features two overbanked elements: moments where the track banks so steeply that riders are partially inverted. The Stengel Dive is the first such element, where riders will have a glimpse of the ground 30-odd metres below as they rocket through the twisted hill. 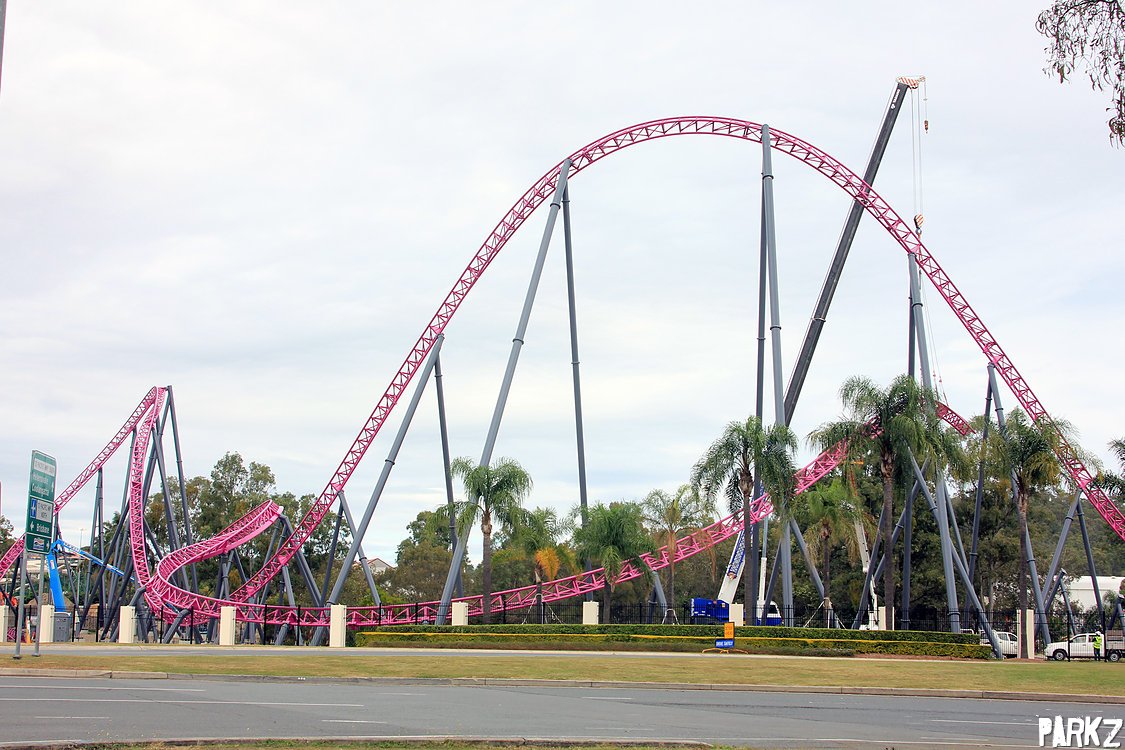 The Stengel Dive is the first moment of near-inversion goodness on Movie World's hypercoaster.

You won't have caught your breath from the Stengel Dive before shooting up another 25-odd metres for the second overbanked element. This time it's an inclined dive loop, a steep twisting drop that spirals down to the ground. 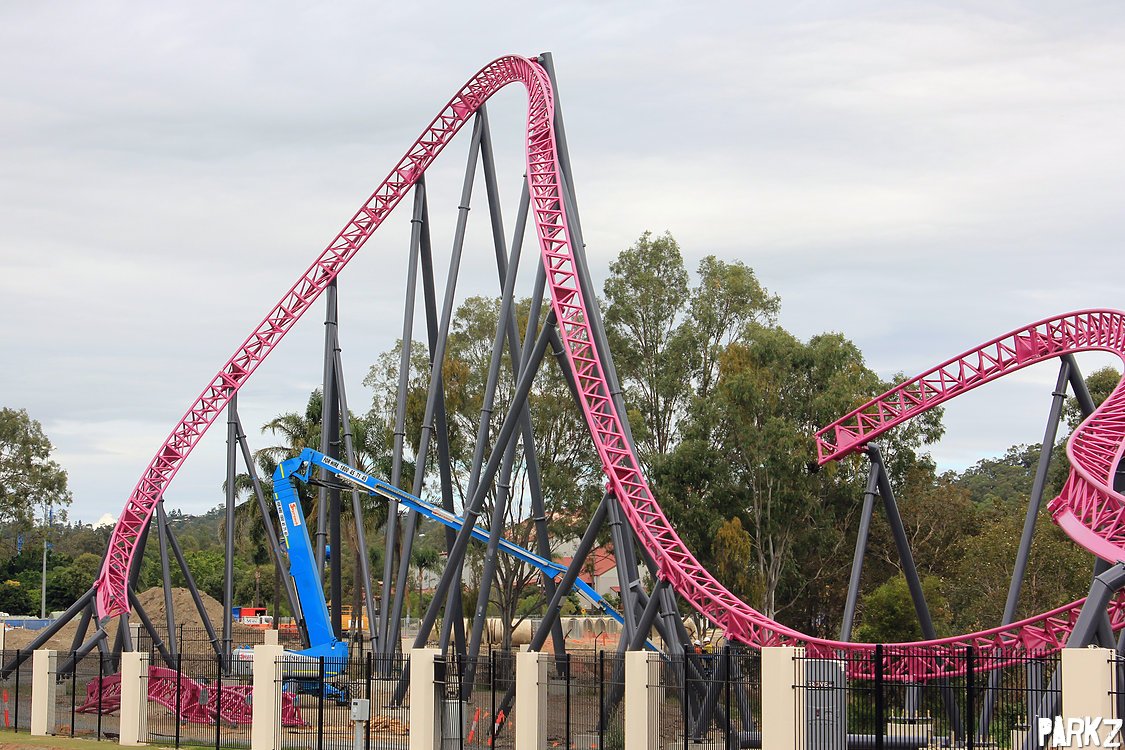 Without blinking the ride heads from the Stengel Dive into this inclined dive loop.

The non-inverting loop could well shape up to be the highlight and focal point of Movie World's hypercoaster – much like the 40 metre tall top hat on Superman Escape that towers over the park. Though the non-inverting loop isn't the tallest point of the ride, it's sure to be the most visually interesting as trains twist through the loop at breakneck speed.

The non-inverting loop is sure to offer a huge moment of ejector airtime, the holy grail of roller coaster sensations.

Airtime. It's that feeling on roller coasters where the train goes down but your body wants to stay up so you're thrust into the restraint that holds you in the carriage. It's butterflies-in-the-stomach feeling known technically as negative g-forces, where you're floating in your seat instead of feeling normal gravity.

Superman Escape is the king of airtime in Australia. But already the barely half complete hypercoaster looks set to deliver more moments of airtime in

Movie World is now the thrill capital of Australia

We've said it before, and it's becoming clearer with every new piece of track installed. By itself it will eclipse every roller coaster in Australia. When it joins the ranks of Superman Escape, Arkham Asylum, Green Lantern Coaster, Batwing Spaceshot, Doomsday Destroyer and Wild West Falls, Movie World will have a cluster of thrill rides that is truly world-class.

Just see Mack Rides' first hypercoaster – Flash at China's Lewa Adventure – in action for a rough idea of what to expect at Movie World later this year. Ours follows an entirely new layout without the giant vertical loop (the non-inverting loop is a much better choice for a hypercoaster!) some really interesting elements and a longer course about 100m longer.

If you want heart-pounding thrills then Warner Bros. Movie World will be the theme park to visit in late-2017.

Grab your 12-Month Mega Pass now for just $99 and lock in your trip!