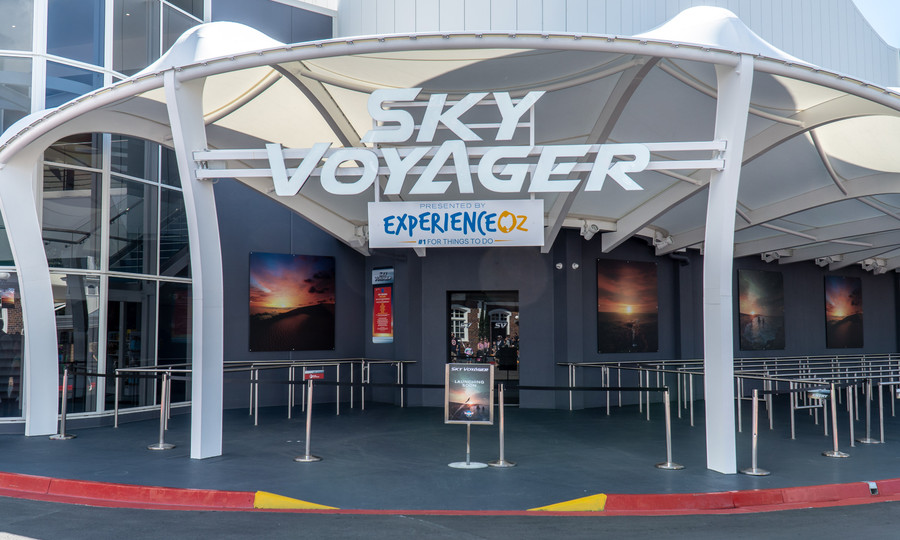 Sky Voyager's long-awaited opening apparently sits in the hands of regulators but Dreamworld CEO John Osborne adds something of a disclaimer when calling the five-months-overdue ride delayed.

"I suppose in the eyes of our guests and people watching from the outside, it has been delayed," Mr Osborne told the Gold Coast Bulletin today.

To guests and outsiders though, the appearance of contractors and engineers working on Sky Voyager in recent weeks certainly suggests that it's more than bureaucratic red tape that's holding up the attraction's launch.

Mr Osborne spoke about the ride's situation in his address to Ardent Leisure investors back in February. At the time he said that the ride was completed with the exception of "minor defects" and that it would be registered "in the near future".

"Despite all of the hard work associated with [its opening], the construction process was probably about 4-6 weeks behind that [December opening] schedule. We deployed all the resources we could to try and get it done in time." Mr Osborne told investors at the time.

"I think the expectation that it could open around Christmas was a bit ambitious," Mr Osborne told the Bulletin today.

Dreamworld had hyped Sky Voyager for a year. It was meant to open in late 2018 and this was extensively promoted in media articles, email newsletters and social media posts. There were even billboards along the M1 motorway – including outside Dreamworld – promoting its summer 2018 opening.

Even if it's out of Dreamworld's hands at this point, they need to own the situation. Delays are delays. The public doesn't need to know the specifics of the compliance issues that are holding up its registration but to pretend it doesn't exist or to tiptoe around the delays to would-be guests is hardly a step in the right direction.

Dreamworld have not made any specific mention of Sky Voyager in recent months, but Mr Osborne does pivot to speak about the ride experience, revealing that the ride is based around the concept of skydiving. Previous installations of similar rides have tended to use more sedate modes of transport like hang-gliding or scenic flight.

Commendably it's a novel concept, though the informations poses plenty of questions about the ride's exterior. If the ride experience is based on the excitement of skydiving, why is the ride building themed to an antiseptic domestic airport terminal?

"When I've been on it, I literally forget about what's going on in the rest of my day and for me that's actually unusual from a personality point of view and with what I'm doing these days."

Characterising Sky Voyager as an escape, it's little wonder that Mr Osborne also said he's ridden too many times to count given the day-to-day realities of trying to course correct an organisation as damaged as Dreamworld.

Doubling down on last month's Bulletin interview where he hinted new thrill rides, Mr Osborne told the Bulletin there will be two major announcements this year.

Not too much scouring is needed: there's a very small handful of reputable manufacturers that Dreamworld should already be engaged in serious discussions with if there's any chance of new major attractions within the next 12-18 months.

Last month Mr Osborne suggested that Dreamworld needed one or two new major thrill rides while hinting at more ride closures to follow on from the removal of Wipeout.

Mr Osborne then set forth his wider vision for the Dreamworld site and their excess land.

"Five to 10 years from now, I see this site being the potential to be an absolutely world-class leisure precinct that includes a theme park with a lot of new and innovative rides, attractions and water slides, a bigger and better animal display, hotel or accommodation that's shorter-term in nature – either on our site or adjacent to our site."

In February Mr Osborne told investors that they were in talks with QIC, who own adjoining land, in regards to a fully integrated bigger picture for the site.

"If you look at the development of theme parks around the world, they've moved into that space where they've become all-encompassing leisure precincts with all of that stuff in it as opposed to just theme park rides or a water park or a zoo."

"I think the time is right in Australia for someone to have a crack at that and if it’s going to be anybody, it should be us."

Village Roadshow are well underway with similar plans five minutes down the road. In addition to Warner Bros. Movie World, Wet'n'Wild Gold Coast and Paradise Country, their Oxenford entertainment precinct also includes Topgolf Gold Coast and Australian Outback Spectacular. Accommodation currently exists in the form of glamping at Paradise Country and there are expansions planned there as well as the development of a major hotel and further entertainment additions.

Mr Osborne would surely agree that the only priority right now should be to get their theme park operation back on track.