In the second part of our chat with Dreamworld CEO Craig Davidson, we talk a new simulator attraction for the park's cinema, his thoughts on DC Rivals HyperCoaster and how the park hopes to compete. 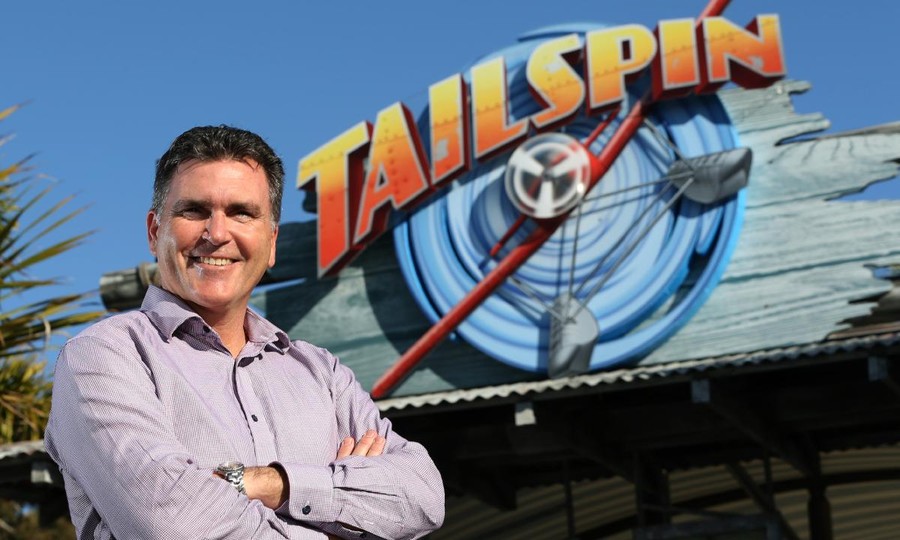 Part one of our chat with Craig Davidson focused on Dreamworld's current woes. As we continued with our discussion last Thursday, the topic moves to the future for Dreamworld and how they hope to grow.

Continuing the trend with the Log Ride, Mine Ride, Wipeout and other attractions that are rejuvenated rather than replaced, attention will soon be given to the Dreamworld Cinema, a long underutilised facility.

"One of the things we're looking at is the cinema. It's been quite a dormant asset."

The Dreamworld cinema is located centrally in the theme park. It was originally an IMAX theatre when the theme park opened in 1981 but in 2010 it was converted to a regular cinema as part of a bizarre strategy to show feature-length films to the public. Less than a year later they pulled the pin on this idea and since then it has largely taken to screening forgettable DreamWorks shorts throughout the day.

"We know that that needs some work. It's a really good building, it's in a prime location and we've got a concept that we intend to go ahead and put in. We see a fairly quick timeframe on that so hopefully by the end of this month we can give you some more information."

I ask if we're talking simulators that make use of the large screen and projection equipment.

"Yeah, something like that. I won't talk about the content at the moment, but bear in mind we're a very Australian brand and Australian theme park and that's really important to us. We're pretty excited about that; [a simulator attraction] is the obvious use of the building, it's a deep and tall building."

Mr Davidson tells me there's other ideas in the works that they can't speak much of – until after Ardent Leisure's AGM takes place on 20 November.

"The cinema, that's sort of our priority."

At the same time, the company is looking to expand upon their relationship with DreamWorks Animation and make the most of the fact that the brand now falls under the Universal umbrella.

"We're working with DreamWorks but also Universal Studios as the parent so the requirements they have in terms of how the brands are portrayed are high. DreamWorks were always that way but you can expect anything we do will be at a global quality."

Their first new addition in this space is an area under construction in the far corner of Dreamworld's Ocean Parade area, a short-term attraction that will open early next year.

"I can tell you it will be a precinct aimed at little kids. It'll be a really cool activation of one of their brands."

The attraction is yet another that relies on licensed brands, which Mr Davidson believes is a key strategy for Dreamworld.

"Ultimately licensing and simulation I think is a really good place for us to be in the short term."

Dreamworld Corroboree is also getting a makeover that will see redeveloped animal exhibits and a new arena for animal demonstrations. As with the first stage of Corroboree, the finished product will be the result of extensive consultation and input with Indigenous communities around Australia.

What Warner Bros. Movie World are currently doing is not lost on Dreamworld, despite having no plans to compete head-on. Mr Davidson has ridden DC Rivals HyperCoaster, their competitors' new $30 million record-breaking roller coaster.

Though major thrill rides is a strategy that made Dreamworld's name in the 1990s and early 2000s, leaving this market behind is nothing new for Dreamworld; in two decades owned by Ardent Leisure there has been heavy focus on their children's areas and rides with the addition of modest thrill rides on rare occasions.

I ask what Craig Davidson thinks of the $25 million investment called for by Ariadne in their successful persuit for representation on the Ardent Leisure board.

I note that by comparison it's still a fraction of what Warner Bros. Movie World have spent on park improvements and major additions in the last few years.

"[That is] a good observation. I'll start there and if they wanted to do that; maybe it's through the sale of land as they've said [...] I'll be happy with starting with at least $25 million. We certainly know what we want to do."

When it comes to justifying how exactly Ardent Leisure can devote this sort of capital to Dreamworld when the company's Main Event business in the USA offers much more lucrative, short-term returns and growth – their strategy there has the potential to deliver returns in the area of 30% if executed correctly – things become vague yet optimistic.

"I think [Dreamworld is] a core Australian asset. I think [Ardent Leisure] see that if they invest with capital now that there absolutely is an opportunity to drive returns like that in the future and I believe that fully."

With talk of selling off excess land to fund the development of Dreamworld, Mr Davidson notes that Dreamworld's existing footprint is anything but full, giving ample opportunity to expand in the future without needing this excess land.

"[Look at] pieces of land within the park. The Thunder River Rapids site, all the way down to the Big Brother amphitheatre. That's a very large site and there's currently an opportunity to properly rethink it. The island is a massive site and we may well have an opportunity to think about that. And we've also got [the old Thunderbolt site] near the water park."

He notes too that selling the land might not be the right decision while competitors Village Roadshow Theme Parks build on their theme Oxenford parks to include night entertainment, hotels and other offerings.

Our discussion moves onto general pricing strategies for the Gold Coast theme parks. For the past decade theme park pricing has felt like a race to the bottom, making sub-$100 annual passes the norm.

"I think before the incident last year we were starting to move away from our competitor in our price classing. Our yields across all ticket categories were higher. This is a different scenario at the moment so you won't see a lot more of the 30 for $30s and the [$79] annual pass pricing."

Mr Davidson sees higher pricing as key to the industry's growth and he believes they need to charge a higher price.

"I believe both [theme park operators] need to start to [increase prices] that so that we can reinvest in things."

But he knows it's going to take time – and money – to get Dreamworld back to sensible pricing levels.

"You can't do it without capital. We need to as a business – as Gary Weiss [Ardent Leisure Chairman] has said – invest in Dreamworld. We have to deserve to get to that space."

Above all, Craig Davidson believes there is a strong future for the theme park under parent company Ardent Leisure.

"I think that's what you're probably going to see with a new Chairman: new direction, new investment."

Be sure to read part one of our interview with Craid Davidson, which covered the theme park's current state and ongoing attraction maintenance and the relaunching of the Eureka Mountain Mine Ride.